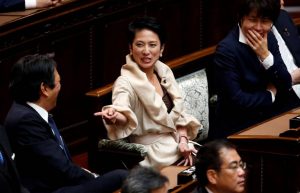 Does Japan really have a deeply embedded gender bias?

That was the claim in the headline over an opinion piece about politics in the Japan Times by a foreign, male professor from a law school in Kyoto.

Gender was also discussed in a report about attitudes to sex and, quite separately, in the context of a puzzling TV advert in which a woman turns into an eel.

Foreigners are generally curious about the nature of relationships in Japan. In the media, journalists tend to highlight complaints of sexism or “a deeply engendered gender bias”. However, these views are less common within the Japanese press.

In his piece of the Japan Times, Professor Colin Jones discussed Renho, the leader of the Opposition. Her father is Taiwanese and her mother is Japanese. This led to a debate over whether she could stand for parliament. Professor Jones believes it would not have been an issue if Renho had a Japanese father. He says Renho’s case “thus offers a stark illustration of the deeply rooted structural impediments faced by women in Japan even today.”

In fact, the controversy appears to have been settled and Renho now attracts a lot of respect as Japan’s first female leader of the opposition. Of course, the hard won success of prominent female leaders does not indicate that gender discrimination has vanished but it partly explains why gender is such an issue for the media.

Away from politics, there was widespread interest in a story which showed Japanese young men in a rather negative way. The sex survey  claimed that about 40% of young single men and women have never had sex – a phenomenon that is being blamed for the low birth rate in Japan.

The Guardian reminded its readers that the study is one of several in recent years that portray Japan as a country with a collective loss of interest in sex. It was the theme of a prurient 2013 BBC documentary No Sex, Please, We’re Japanese.

But the Guardian suggested such claims are exaggerated and misleading.

Another story which was shared on social media was about a TV advertisement in which a Japanese girl turns into an eel. This ad was designed to promote ethical farming.

Many websites claimed – without much evidence – that it was “withdrawn for being sexist”. Yet the community which discussed it on Japan Today generally felt that it was unlikely to have been seen as sexist by its Japanese viewers. Many of them found it rather charming.