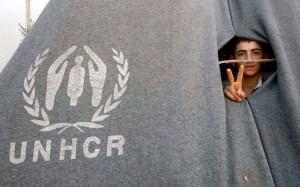 The United Nations is putting pressure on Japan to accept more refugees, especially people displaced by the war in Syria. Prime Minister Abe has said Japan should deal with its own problems before taking in newcomers.

This week, the head of the UN body responsible for refugees, Antonio Guterres, was in Tokyo. He was quoted by Reuters as saying he would like the Japanese government to increase the number of people resettled in Japan and be especially open to the the humanitarian admissions of Syrians.

There was no direct and official response from the government, although Prime Minister Abe has so far pushed aside the issue of accepting refugees, preferring to respond to the crisis by offering money.

He recently told the United Nations that Japan would offer some $1.6 billion to assist Syrians and Iraqis displaced by conflict and for building peace across the Middle East and Africa.

Another influential person calling for more refugees to be accepted is Sadako Ogata, 88, who used to be the UN’s High Commissioner for Refugees.

She said it was nonsense to suggest Japan does not have the resources to accept refugees and it is not doing enough on the humanitarian front, despite its desire for a bigger global political role.

The interview with Lady Ogata was a scoop for Reuters’ Tokyo team Linda Sieg and Ami Miyazaki who point out that Japan accepted less than a dozen asylum seekers last year, despite five thousand applicants.

Japan’s attitude towards immigration puzzles many foreigners, particularly Americans, who are used to living in a multicultural society drawn from immigrants from all over the world.

Farah Stockman, writing in the Boston Globe, says that although most Americans consider the influx of talented, energetic immigrants to have benefitted their economy, Japan thinks the opposite way. Her report focusses on members of the Nikkei community in Japan; Japanese-Brazilians, whose families emigrated to South America at the turn of the 20th century and who have now returned.

Their situation is difficult, as I witnessed when I made a programme about them for the BBC and found a family of six people sleeping on the floor of a tiny flat in Hamamatsu.

A poster called Sensato made an interesting comment on the Japan Today website: “In the late 1800s into the early 1900s the Japanese government actively encouraged massive emigration of Japanese people to North/South America and elsewhere in Asia as a means of alleviating poverty in Japan’s rural areas (not to mention the enormous emigration push by Imperial Japan). It is time for Japan to return the favor and accommodate many more refugees who need a fresh start.”

Accepting refugees and encouraging immigrants to come and work in Japan are different issues. In discussing the latter point, the American business newspaper the Wall Street Journal claimed that Prime Minister Abe has ruled out a significant increase in immigration, despite many economists’ contention that it is essential to meet Japan’s long-term demographic challenges.

The WSJ said that even though Japan has an unemployment rate of just 3.4% –  one of the lowest in the world – it still faces labour shortages in many sectors. 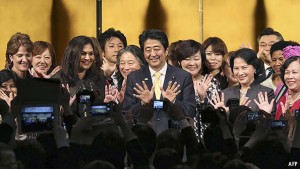 The media often presents Japanese women as sexy and strange. Yet it also frequently reports on the pressures women face to become successful in their careers, suggesting they have a duty to assist Japan’s economy.

This week, the readers of the leading US business newspaper the Wall Street Journal were presented with a striking image of three Japanese women wearing bikinis, bathing in red wine at an onsen. Apparently Beaujolais Nouveau is good for the skin. It was a typical fun picture story and a dramatic contrast to the heavyweight piece in the Financial Times about female entrepreneurs being coached for leadership roles. The FT piece showed two women leaning over a laptop, working hard.

The FT explained that the Japanese prime minister Shinzo Abe is pushing for more women to take leading roles in business and government. If he succeeds in closing the gender gap in employment, Goldman Sachs estimates it would boost Japan’s gross domestic product by almost 13 per cent.

The contrast of the pictures and articles in the FT and the WSJ reveal Japan’s dilemma over gender. Many sources this week covered a report from the World Economic Forum showing that Japan ranks 101st out of 142 countries in the global gender gap index. That was a few places higher than last year but Japan’s female participation rate in the labour force remains one of the lowest among developed economies.

It has been claimed that one of the reasons for this is because many women have trouble maintaining careers after having babies because of “mata hara,” short for “maternity harassment at work. A government survey suggested this is a widespread problem and the British newspaper the Guardian cited it as an example of widespread discrimation against women by Japanese men.

Examples of Japanese male chauvinism are seized on by the press. Take the case of the manga cartoon called Himozairu. It showed men learning how to become good at housework in order to attract girlfriends. The Washington Post said that the cartoon by Akiko Higashimura, a well-known Japanese manga artist, was withdrawn from a magazine called Morning because some readers claimed it was demeaning to men.

Another area where there is a lively debate over gender is gay rights.

Japanese women are often seen as depending on men for emotional and financial fulfilment. Yet the widely circulated photographs of Hiroko Masuhara and Koyuki Higashi, who recently signed a civil partnership in Tokyo, presented a different image.

The Tokyo ward of Shibuya has issued them with a certificate which allows them to enjoy many of the benefits of a couple which are normally reserved for married people. Writer Erica Friedman discussed the issue in Slate and asserted that LGBTQ groups in Japan are becoming braver every year. She said that many people who have never really thought about gay rights are now considering the issue due to the media. 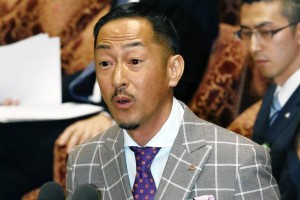 A university president who publicly supported Prime Minister Abe’s defence policy has lost his job. The news has led to a debate about freedom of speech and highlighted the divisions within Japan over the sensitive issue of national security.

Koji Murata, 51, a professor of political science, was until recently the president of Doshisha University in Kyoto Prefecture. In the summer of 2015, he was invited to Tokyo to give his views on controversial proposals concerning defence and security, which Mr Abe was trying to bring into law.

During his testimony before a committee of MPs, Mr Murata said the security legislation proposed by Mr Abe was necessary for Japan. This caused anger among many of his colleagues from Doshisha. More than people from the university signed a petition denouncing Mr Murata’s comments.

The petition said “we are ashamed from the bottom of our hearts that despite [the nature of] the legislation, the professor who serves as the president publicly expressed support for the bills.”

When Mr Murata stood for re-election last week, he lost the vote and was replaced by a candidate who had criticised him.

As in the US and Europe, it is common for university staff in Japan to be openly critical of government policies. For example, Noriko Hama, a professor of economics at Doshisha uses the phrase Stupidnomics to pour scorn on Mr Abe’s economic policy.

Professor Hama is often quoted in the international media as she speaks perfect English and has a dynamic term of phrase. I interviewed her many times for the BBC.

Support for Mr Murata came from the Wall Street Journal. The paper commissioned an article about the case by Michael Auslin from the right-leaning think tank the American Enterprise Institute. He suggested the university staff curbed Mr Murata’s freedom of speech by removing him from office. Mr Auslin said Japanese academics normally accuse Mr Abe of repressing their liberal views.

Events at Doshisha reflect the passion stirred by Mr Abe’s security reforms. There was nearly violence in the Japanese parliament when they were debated earlier this year. The changes allow the Japanese military to fight in defence of allies such as the US even if Japan itself is not directly attacked.

This is based on a reinterpretation of the pacifist clause of Japan’s constitution, which was drawn up by the American occupying forces at the end of WWII. That clause forbids the use of military force except in self-defence.

However, the reinterpretation is a less drastic step than a permanent rewrite of the constitution, which was at one time on Mr Abe’s mind. The security issue has lost him support among many voters.

Mr Murata’s profile has been raised by his dismissal. Given his outspoken views, striking appearance and fashionable clothes, there will now no doubt be plenty of offers for him to exercise his freedom of speech through the media. 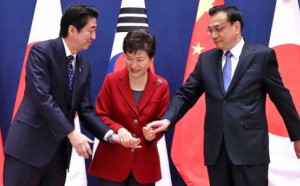 There has been a breakthrough in Japan’s diplomatic relationship with China and South Korea. The leaders of the three countries met for the first time in three years last weekend. A few days later, China’s premier urged Japanese businesses to maintain their trade with China, despite a slowdown in China’s rate of economic growth.

On Sunday, Japan’s Prime Minister Shinzo Abe, China’s Premier Li Keqiang and President Park Geun-hye of South Korea met in Seoul. Such meetings had been suspended since 2012 amid disagreements over history and territory. Afterwards, the leaders issued a joint declaration stating that their trilateral cooperation has been “completely restored”. They promised to resume their regular meetings and said they would work towards greater economic integration.

The media were largely positive about Japan’s role in the summit. For example, Joseph Nye of Harvard University wrote in the Huffington Post that Mr Abe has been relatively successful in terms of foreign and defence policy. Defence has been a keynote issue for Mr Abe. He has enhanced the role of the Japanese Self Defence Force but he has not overturned the pacifist clause of Japan’s constitution, a step which would have infuriated China.

This week, more than two hundred members of the powerful business association the keidanren travelled to Beijing. The Chinese premier Li Keqiang urged them to strengthen business ties with China. He promised to broaden market access and provide a more open and fair investment environment for foreign companies.

The relationship between South Korea and Japan still suffers from the pain caused by Japanese occupation. The biggest stumbling block, according to President Park of South Korea, is the issue of “comfort women”. Such women were enslaved by Japan to provide sex for its troops, and articles which shame Japan over the issue often appear in the Korean media. Following the meeting in Seoul, the two countries agreed to hold more talks on the issue and Mr Abe said they “should not leave behind difficulties for future generations” in building a co-operative relationship.

When it comes to the legacy of occupation, China shares similar resentments against Japan to South Korea. However, that does not mean they necessarily gang up on their former enemy. South Korea and Japan have more in common politically with each other than they do with China; both are allies of the United States. For Japan, the ultimate diplomatic goal is cordial relations with all its neighbours and with with the US, a challenge made more more complex by China’s rapid economic rise and increasing diplomatic assertiveness.