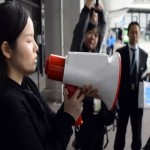 Foreigners who speak Japanese are able to understand Japan better than people who cannot speak the language, according to Prime Minister Shinzo Abe. For most foreigners, mastering the language is a daunting task. Fortunately, the Japanese themselves are striving for better English and claim to have invented a wonderful machine which translates Japanese to English if you hold it in front of your mouth when speaking.

Some foreign diplomats based in Tokyo had a treat this week: lunch with the Prime Minister. He chose guests who speak Japanese and praised them for learning his country’s language.

“It is very encouraging for us to have people like you who can understand and speak Japanese,” Mr Abe told his guests.

“I would like people like you, ambassadors, to speak about the true colours of Japan and charms of Japan in what I hope will become a powerful force in promoting understanding of Japan,” he said.

I have respect for any foreigners who can understand the prime minister’s Japanese. Despite intense efforts to learn the language, I would find it difficult to grasp a phrase like that, especially if it were delivered in the formal type of language known as keigo.

The article led me to ponder the question: how much of what I know about Japan came through speaking about it in English? And what extra things have I discovered about the country through learning Japanese?

Before attempting an answer, let me share some responses to Prime Minister Abe’s speech on the discussion area of Japan Today, which is often used by foreigners who know Japan well.

A poster named Strangerland said people who understand Japanese “can obtain information that is not filtered through translation (translation almost always loses some nuances and subtleties), and in learning a language, one learns more of the culture… (because) language shapes the thought of the people.”

The majority of things I have learned about Japan comes from conversations I have had with Japanese people in English. After that, books, newspapers and the internet written in English have shaped my understanding. But my enthusiasm to learn the Japanese language and my willingness to use it has encouraged the Japanese to tell me more about their country, so my understanding has deepened.

Fortunately for foreigners, the Japanese enjoy learning English. For example, this week we read of a plan to test junior high school students in English conversation.

However, all that study is tiring so how fantastic to read about a machine that automatically translates spoken Japanese into English. It appears to be an old fashioned megaphone, with a clever translation device built in. Speak into the end and your Japanese words change to English. You can judge for yourself how well it works by watching the video.

I would love one for Christmas. 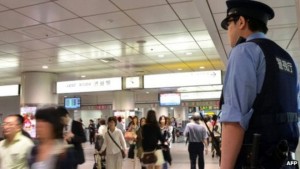 Many of Japan’s social systems have much in common with the West. However, its criminal justice system is significantly different.

There are often reports in the international media which are critical of Japan’s police, prisons and the death penalty. Some of those reports lack understanding of Japanese culture. But the Economist magazine has produced a well-researched study of Japan’s criminal justice system, which provides useful context when comparing it to the West.

The Economist said that crime rates in Japan are roughy a tenth of those in other rich counties. It says a wallet left on a train is often handed into the police. Great effort is made to rehabilitate criminals, especially young people who are caught up in minor crime. This means that Japan has a low prison population in comparison to the USA and the United Kingdom.

The problem the Economist identifies is an over reliance on confessions, which it says are seen as the “king of evidence”. Almost everyone who confesses to the police is found guilty but some people confess by mistake or under duress. This causes miscarriages of justice. For example, Keiko Aoki spent twenty years in prison after she confessed to killing her daughter in a fire. The fire was in fact caused by an accident and she was released from prison in October.

Japan still uses the death penalty. The opposition Democratic Party wants to abolish it but they have little power. However, there are plans to improve the safely of convictions. For example, by forcing the police to make audio recordings of all interviews with suspects.

The relationship between prosecution and defence lawyers is also under review. The aim is to ensure more robust legal argument. The Asia Pacific Journal claims Japanese prosecutors have a tendency towards tunnel vision which leads them to dismiss evidence that is inconsistent with their preferred outcome as irrelevant, incredible, or unreliable.

The international human rights advocacy group, Amnesty International also has concern about Japan. Its East Asian researcher Shoji Hiroka asks how locking someone up in a cramped cell, alone for decades can ever be justified. He asks: “Does the Japanese criminal justice system guarantee fair trials and provide enough safeguards against forced confessions? And if the risk of executing the innocent is always present, will there ever be enough safeguards?” 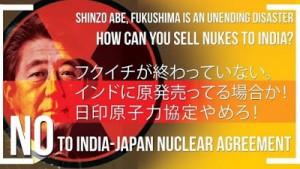 Japan’s prime minister says its innovative green technology can tackle global climate change. But a plan to sell nuclear power reactors to India has been criticised as “eco-destuctive” and condemned by the former mayor of Fukushima.

This week, Prime Minister Shinzo Abe was among the world leaders to give a speech at the COP21 conference on climate change in Paris. His comments included a classic piece of chequebook diplomacy, as he pledged that Japan would increase its support for developing nations from a trillion yen to 1.3 trillion yen ($10.6 billion) a year by 2020.

For example, Mr Abe said the next generation of Japanese made batteries will enable electric cars to travel five times further than they do at the moment.

Japan has a strong motivation to be energy efficient as it relies on other countries for its oil and gas.

It recently restarted its nuclear power reactors following the Fukushima disaster. The nuclear shutdown led to more fossil fuel use within Japan and that caused a rise in greenhouse gas emissions. It also deterred other countries from signing deals with Japanese energy companies. The UK chose China as its nuclear energy partner.

Japanese multinationals such as Hitachi, Toshiba and Mitsubishi are seeking opportunities elsewhere. They will have Mr Abe’s support when he visits India next week. There is speculation that a deal could be struck to invite Japanese companies to develop nuclear power reactors in India.

India’s Coalition for Nuclear Disarmament and Peace (CNDP) has gathered a petition condemning the move. It said: “We strongly demand that Japan must not proceed with negotiations for sales of nuclear technology to India and also must refrain from nuclear export to other countries. The India-Japan nuclear agreement must be terminated for its dangerous international implications and for unleashing an anti-people and eco-destructive nuclear expansion in India.”

Another critic is Katsutaka Idogawa, who was the mayor of Fukushima when the nuclear accident happened in 2011. He has appealed on Youtube, asking Mr Abe not to sell the nuclear technology to India.