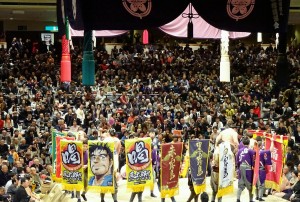 Watching sumo on television can provide an insight into how the economy is faring, according to one of Japan’s top economists.

He senses positivity and optimism, in contrast to the negative and pessimistic reports about the economy elsewhere in the media.

The economic analysis of the sumo starts with the wrestling itself. Forbes informs its readers that last month, a sumo wrestler named Kotoshogiku became the first Japan-born wrestler in a decade to win a tournament after domination by Mongolian fighters.

“It was a great day for all people in Japan”, a Tokyo-based real estate dealer told Forbes.

The theory is that sporting success raises people’s spirits and makes them more willing to spend and invest. Plausible, but not particularly scientific.

However, the advertisements which are shown during a sumo match, appear to provide an indication of how companies spend their money.

Sumo is most widely watched on NHK, the national broadcaster which does not show advertisements. However, it does relay pictures from the wrestling ring, which show people parading around with banners.

Those banners, which are rather old fashioned, carry ads for comics, snacks and beer. They cost around $500 dollars each. NHK allows them to be seen on TV, even though it does not receive any income from them.

Akiyoshi Takumori, an economist at Sumitomo Mitsui Asset Management, believes that by counting the number of advertisements, investors can gauge whether executives are bullish on the economy and willing to spend their companies’ cash.

“The ads are like supplementary traffic lights to the main ones, regular economic indicators,” Mr Takumori  told Bloomberg. “If you watch them, you can tell whether the main lights will turn red or not.”

Away from the wrestling ring, the red lights were being flashed by Nomura, the leading bank. Its latest report clearly predicts another downturn in the Japanese economy, pushing it back towards recession.

Nomura says that although it expects the negative interest rate policy adopted by the Bank of Japan last month to have some effect in terms of weakening the yen, it is unlikely to provide a major boost to the economy, given such factors as the negative impact on earnings at financial institutions. 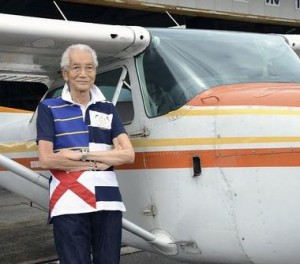 We know that the Japanese live long lives, with many people surviving beyond a hundred years of age. Is one of the reasons that they heed advice on how to live well?

Very often, articles in the international media present Japan’s ageing population as a problem. Some writers complain about Japan for its weak and feeble elderly, pointing out that the rising cost of healthcare for the old is an economic problem which leaves Japan with enormous debts.

So it was refreshing to read a much more positive editorial comment piece in the Times this week, entitled In 21st-century Japan, 90 is way too young to retire.

The article begins: “If you are still alive and fit at 93, you might as well do something with your time. This is part of what compels Jun Takahashi to keep taking his Cessna on joyrides round Mount Fuji.”

There’s a compelling portrait of the pilot in a series called Spirit and Spine ‘(Kitohone’) which provides in English the personal histories of Japanese seniors who continue to work actively.

Mr Takahashi is a lovely example of what I call Japan’s Powerful Old – a subject I made a series about for the BBC.

When it comes to the very old, Japan boasts 61,000 centenarians – four times as many as Britain. This longevity is an achievement that has followed the Second World War. Since, 1950 the proportion of people surviving to 100 has risen 600 fold. In Britain it has risen by a much lower factor of 140.

One of the things that struck me about the Times article was its suggestion that the Japanese may live longer than the British not because of genes but because of wise lifestyle choices.

The Times says “The Japanese are more willing than most to be lectured on public health.” It points out that in the longest lived prefecture in the country, Nagano, farmers have been asked to cut the salt content in their pickled vegetables, known as  tskemono.

Messages about having a healthy diet seem to be heeded, because Japan has a low obesity rate, even though there are an abundance of sugary snacks and potato chips on sale in vending machines and kiosks.

The value of regular exercise was entrenched in the Japanese mindset during the post war industrial boom with morning movement classes obligatory for workers of every grade. When Japanese firms tried to adopt such practices in their foreign plants, most westerners scorned and refused to comply.

And in Britain, when faced with advice to slim down and do more exercise, the resistance to being “lectured” remains strong. For example, the papers this week reported a study by Boston University which suggested losing weight in middle age would help people avoid Alzheimer’s disease in later life.

In an opinion piece in the Daily Telegraph that is designed to be amusing and ironic, Charlotte Leather says she will ignore the advice from the medical researchers because people who do exercise in their 40s are “airheads”.

“So, must I now, while I can still remember, get up at the crack of dawn, don the padded cycle pants and start spinning like a washing machine on full blast? Or do I take my mother’s advice and grow old gracefully, accepting that middle-aged spread is a little part of life and, well, a large part of my middle. Even if it ups my chances of dementia?”

The columnist is skilful in identifying the way in which many British people think about such issues.

One area where health advice does not seem to be particularly effective in Japan is smoking. The smoking rate among Japanese men is more than 30 percent (it is much lower among women). In the UK, it is about 19 percent.

However, while smoking in public places is allowed in Japan, here in Britain another step to reduce the level of addiction takes place next month, when tobacco branding is banned and cigarettes are sold in plain packaging instead. 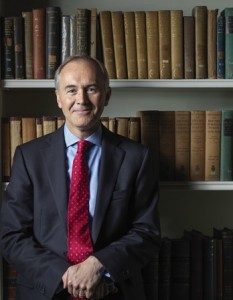 “If there is one thing that I want you to remember from this talk it is that the UK wants to have healthy growing partnerships with both Japan and China.”

That was the core message of the lecture which the British ambassador to Japan Tim Hitchens made to the Japan Society hosted by Nomura in London this week. He is an excellent communicator and his message was reinforced by an effective Power Point presentation.

The slides contained no words or numbers – only pictures. Many of them were pictures of Japanese people but Ambassador Hitchens also chose one very striking and famous image of a Chinese person: President Xi shaking hands with the Queen on his visit to London in the summer of 2015.

Prime Minister David Cameron said at the time that this was the start of a “golden era” in the relationship between Britain and China.

That caused disquiet in Japan, which has more in common politically with the UK than China. However, trade with China is far more important to the British economy.

The Ambassador announced that Prime Minister Cameron, the Foreign Secretary Philip Hammond and the Chancellor George Osborne are all planning to visit Japan in 2016. He did not give a date.

Mr Hitchens did not say this but my view is that at the moment, it would be difficult for Mr Cameron to leave Europe, where he is battling with other European leaders. He is also battling with cabinet colleagues over whether Britain should remain an EU member.

If a referendum goes in favour of a withdrawal, Mr Cameron’s credibility will be damaged and he may resign, according to the Financial Times. Most people expect the referendum to take place in June.

There may even be a trilateral summit but at prime minister level not at presidential level. If so, this would involve Mr Abe, Prime Minister Hwang Kyo-ahn of Korea and the Chinese premier Li Keqiang.

Ambassador Hitchens applauded Mr Abe’s efforts to improve relationships within the region. He himself will leave office at the end of the year but he has promised to return to the Japan Society to give an update on progress in 2017, by which time the political situation in Britain may look very different.