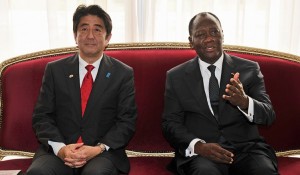 One of the most profound changes to the world in the past decade has been vast Chinese investment into Africa. It has exceeded 100 billion US dollars and the money has stimulated development across the continent, lifting millions of Africans out of extreme poverty.

Yet Chinese state media says that the country’s investment into Africa declined by 40 percent last year. That is partly as a result of slowing economic growth in China but also because of lower commodity prices.

So could Japan step in to fill the shoes of China? The Chinese investment still far exceeds that of Japan. But this year, Japan is promoting projects in Africa which will benefit its own international businesses.

For example, Marubeni recently announced that it plans to build a new power station in Egypt – a classic example of a big infrastructure project backed by loans by the Japanese government. It is also the kind of project where Japan and China are seen as rivals.

Foreign expertise in power generation is welcome in Africa, where electricity shortages are a serious problem.

Shinzo Abe will talk about Japan’s role in Africa when he visits Kenya later this year. And in late August, Japan will host the TICAD (Tokyo International Conference on African Development) in Nairobi.

This Japanese activity in Africa can annoy China. There have been occasions where the Chinese have tried to stir up anti-Japanese sentiment among the Africans. And as the Japan Times recently pointed out, China’s propaganda ministry tries to use the African media to present China in the best possible light.

However, both the Japanese and the Chinese want peace and stability in Africa because that helps safeguard their investments. Japan places special emphasis on quality growth and human security.

This week, I asked the CEO of Sumitomo Corporation for Europe and Africa, Mr Kiyoshi Sunobe, if the Japanese view on Africa was changing because of the slowdown in Chinese investment.

He told me that fall in commodity prices was a much more significant influence on Japanese investment decisions.

His answer reminded me that the prices of oil and metals such as iron ore, copper, and platinum all declined substantially last year and the people who will feel the impact the most are the people living in sub-Saharan Africa.

The World Bank Economic Outlook report for the region says its economic activity decelerated from 4.6 percent in 2014 to 3.4 percent in 2015, the weakest performance since 2009.

Sadly for the Africans, that means the gains in income from abroad they have enjoyed in recent years will be very hard to maintain, regardless of any actions by China or Japan. 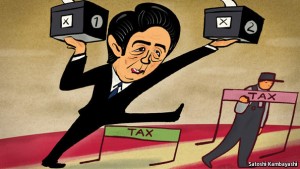 Not many leaders call on international experts to bring them bad news. Yet Japan’s prime minister Shinzo Abe this week invited one of the world’s leading economists to talk to him “candidly” about Japan’s situation in the world.

The message from the Nobel Prize winning economist Joseph Stiglitz was not encouraging.

“A few years ago, no one would have anticipated that the global economy would be as weak as it is today,” he said at the prime minister’s office. “When economic circumstances change, you have to adapt your policy.”

Professor Stiglitz also urged Mr Abe not to raise Japan’s consumption tax, or sales tax. That is a contentious issue as it is closely linked to Abenomics. A higher consumption tax should mean more government income. But it can become a drag when the economy is close to recession.

Mr Abe’s meeting with Professor Stiglitz was not primarily about tax or domestic Japanese politics. It was more about how the changes to the global economy will affect Japan. In particular, the slowdown in Chinese growth and the knock-on effect of low energy prices.

Mr Abe was not the only person listening to Professor Stiglitz. The Economic and Fiscal Policy Minister Nobuteru Ishihara, the Chief Cabinet Secretary Yoshihide Suga and the Bank of Japan Governor Haruhiko Kuroda all attended the seminar.

More experts are due in Japan for similar top levels meetings soon, including another world-class economist, Paul Krugman.

Japan’s leaders may be prepared to listen to the opinion of foreign experts but they do not find it easy to change their policies in the wake of their advice. That is partly because the the civil service is so slow at implementing policy change.

The Economist magazine uses its voice to encourage more reform in Japan. This week, its analysis of Mr Abe’s political challenges warned that voters will blame him if the economy does not recover as he has promised.

The Economist believes that Mr Abe’s primary political goal is the reform of the constitution, in particular Article Nine which commits Japan to pacifism. It says in order to change this, Mr Abe needs the overwhelming support of both the upper and lower houses of the Japanese parliament. He could then put the issue to the country in a referendum.

But the Economist says that such a move would cause deep alarm among many Japanese people. That may not be a point of view that Mr Abe wishes to hear. 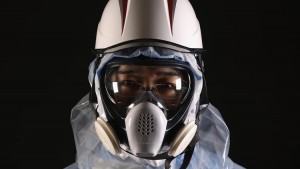 “There is a saying in Japanese: put a lid on something that smells. Loosely speaking, that means hide a problem rather than deal with it.”

That was the comment made on a TV programme by Olivier Fabre of Reuters Television. His view, as an experienced journalist covering Japan, is that it is difficult to persuade people to speak openly on camera about painful experiences.

No recent experience has been more traumatic for Japan than the Great Eastern Japan Earthquake which occurred five years ago.

A reluctance among the Japanese to speak openly about the trauma has presented a challenge for the foreign journalists seeking to cover the event’s anniversary. What human stories can they tell if the humans don’t want to tell them?

In one report, the BBC’s Rupert Wingfield Hayes chose to focus not on the humans, but on animals.

He entered a home that had been deserted after the nuclear disaster and found it has been attacked by wild boars. The desolate scene looked like something from a horror movie. The boars were not shown on camera but the report showed the mess they had caused as they looked for rotten food in a broken refrigerator.

Other reporters spoke to people who had lost relatives or were forced to abandon their homes because of the nuclear disaster. CNBC interviewed Noshiyuki Kouri from Namie, a town just 10 km from the Fukushima Daiichi plant.

“My kids and their families have no plans to return but my ancestors are buried here. I need to keep coming back to honour them and keep my home intact.”

The main issue covered by the media was Japan’s relationship with nuclear power.

A few days before the anniversary of the disaster, a court ordered the shutdown of two nuclear reactors which had previously been declared safe.

Naturally, this disturbed the Japanese, whose trust in the authorities was undermined by a series of mistakes and cover-ups at Fukushima.

The new shut down was especially worrying because the reactors in question had been restarted relatively recently. Their owner insisted they comply with rigorous safety standards.

Despite this setback, the Japanese prime minister Shinzo Abe told a press conference: “Our resource-poor country cannot do without nuclear power to secure the stability of energy supply while considering what makes economic sense and the issue of climate change.”

He said the government would “not change its policy”.

The New York Times showed some sympathy for Mr Abe’s position, pointing out that Japan is a rather small, mountainous country that has always been short of natural resources on its own.

Japan is the biggest importer of natural gas in the world and that is why the alternative of homegrown nuclear was always so attractive—before Fukushima.

However, the rebroadcasting on television of the terrible events five years ago will be a stark reminder to the Japanese of the risks involved with nuclear power in a country prone to earthquakes and tsunamis. 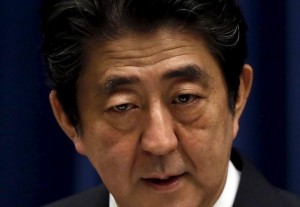 The prime minister of Japan is bullying journalists, according to one of the most experienced foreign correspondents in Tokyo.

Richard Lloyd Parry of the Times, who has written about Japan for more than twenty years, said Shinzo Abe and his government’s intimidation is causing newspapers and broadcasters in Japan to become “timid”. He said the situation is becoming worse.

His comments follow the departure of several leading broadcast journalists – Ichiro Furutachi, Hiroko Kuniya and Shigetada Kishii – who were noted for their tough line of questioning of politicians.

Mr Lloyd Parry told the Japan Now conference that the government has “been spinning pretty hard to get things reported their way. It’s the government’s job to try to tell the story their way – but it’s the job of the media to resist that.”

Another British paper, the Guardian, said the departure of the television reporters followed a warning by minister Sanae Takaichi that broadcasters which repeatedly failed to show “fairness” in their political coverage, despite official warnings, could be taken off the air.

“This is nothing but intimidation against broadcasters,” the Japan Federation of Commercial Broadcast Workers’ Union said in a statement. “[Takaichi’s] remarks represent a glaring misinterpretation of the law and we demand that she promptly retract her remarks.”

Richard Lloyd Parry of the Times said: “As a British reporter, you aim to heap embarrassment and shame on someone in authority and if you do so, you win admiration of your colleagues. In Japan, some reporters, as individuals, want to dig dirt and want to challenge power. But that is generally not true of the big media companies. They explain power rather than challenge power.”

However, scandals revealed by the press have led to two high level political resignations in Japan so far this year.

A few weeks later, the same magazine reported that a politician Kensuke Miyazaki was having an extramarital affair days before his wife gave birth. That ruined his image as a caring family man, who was calling for laws to protect fathers who want to take time off work to care for their wives and young children.

Both resignations received extensive media coverage in the Japanese mainstream press and were picked up by the international media.
So although most respectable people say they do not believe all things they read in gossipy magazines like Shukan Bunshun, they hold considerable influence.

And their reporters cannot be described as timid when it comes to revealing the shady side of powerful people.