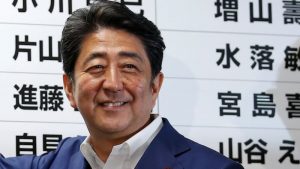 Is it true that Prime Minister Shinzo Abe believes that Japan did nothing wrong in the Second World War?

That was the assertion made by the journalist Richard Lloyd Parry in the Times newspaper this week.

In assessing Mr Abe’s nationalism, Lloyd Parry described what he believes are the views of the prime minister: “Japan did nothing wrong during the war – or nothing that western colonial powers were not also doing. The atrocities committed by the Imperial Army are gross exaggerations conjured up by Japan’s enemies.”

If those are indeed Mr Abe’s opinions, they align closely with those on the right wing extreme. Such views are associated with the neo-fascists who drive around Tokyo in black vans broadcasting propaganda, to the disgust of most Japanese people.

Yet Mr Abe has recently won a major election, which suggests that he is not regarded as an extremist by most voters. The Liberal Democratic Party – normally regarded as centre right – won a solid majority in the upper house of the parliament. Thus strengthened, Mr Abe could now prepare to revise Clause Nine of Japan’s constitution, which commits it to pacifism.

A sympathetic view for Mr Abe’s proposal for a revision of the constitution was expressed in an editorial in the Financial Times, now owned by the Japanese newspaper the Nikkei: “Japan is justified in adapting its national security framework to a changing world. But Mr Abe must first make the case to the Japanese people.”

The Financial Times also published an opinion piece by Sheila Smith, a senior fellow at the Council on Foreign Relations. She expressed concern at any revision of the constitution, which to her mind, strengthens the rights of individuals in Japan, including people’s right to make “choices of religion, work, protest and due process which Japanese citizens today take for granted.”

Even if Mr Abe wishes to change the constitution and has support in parliament, he still needs public support. That would mean a referendum.

Japan has never held a referendum and to do so now risks division. The Economist said: “Close advisors suggest that Mr Abe will not push for early change. Brexit, they say, has come as a stark reminder to him of how, without laying the groundwork, a referendum can divide a country and produce an unexpected outcome.”

For a cautious politician like Mr Abe, the prospect of calling a referendum that might go against him is an enormous risk. Yet he may take such a risk in pursuit of his long term goal of preparing Japan to take a much more assertive global role.