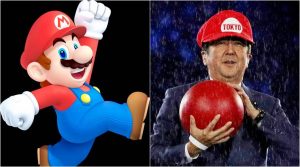 When Japan’s Prime Minister Shinzo Abe dressed up as Super Mario and popped out of a pipe at the end of the Olympic Games ceremony in Brazil he was sending a couple of important messages.

Firstly, he wanted to show that he is a fun, friendly person and not an scary nationalist, as he is often portrayed in the Chinese and South Korean media.

Secondly, he wanted to reinforce his image as a super salesman for Japan and a tireless supporter of its business.

Mr Abe’s Mario costume fell away almost the instant he appeared, leaving him standing in a sober suit.
Shinzo Abe has a vision of a prosperous Japan at the heart of global trade. He vigorously advocated Japan’s membership of the Trans-Pacific Partnership, to the delight of big business.

Yet Prime Minister Abe’s commitment to the TPP project caused dismay among people who expected him to be conservative and protectionist. Mr Abe’s opponents accused him of betraying them through a push towards globalisation. Farmers feared the deal would take away their livelihood by tearing down their protection from foreign competition.

Japan continues to seek free trade deals with the European Union and with China and South Korea. In those two countries, another aspect of Mr Abe’s vision – for Japan to play a greater role in global political affairs – sometimes causes unease. Of particular sensitivity is the suggestion that Mr Abe plans to reform the pacifist cause of Japan’s constitution to enable its forces to fight abroad.

Mr Abe himself has warned against “naked nationalism” and the label of nationalist seems somewhat at odds with his globalised world view. However, what matters a great deal in terms of trade is Japan’s image. Japanese corporate success depends on its companies’ ability to provide consumers with goods and services without any disruptions caused by politics.

The best approach is a modest one such as that taken by the Mitsubishi Corporation at Andhra University in India. Its Japanese cultural centre offers students green tea and lessons in the the gentle art of origami. In such a context, promoting Japan is about showing a friendly face to its neighbours. And perhaps inviting them to a session on the Nintendo 64 for a game of Super Mario. 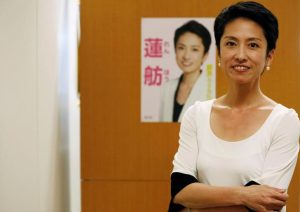 A woman with a tough reputation for trying to stop Japan wasting money is hoping to be the lead challenger to Prime Minister Shinzo Abe.

Reuters says that Renho has become the clear favourite to become the first female leader of Japan’s biggest opposition party, the Democratic Party of Japan.

She is hoping to succeed Katsuya Okada who recently announced he would resign following poor election results for the party.

Renho, 48, has a a Taiwanese father and a Japanese mother and uses only one name in public life.

She told Reuters that Prime Minister Shinzo Abe’s “Abenomics” policy has stalled and a change of gear is needed to favour people over corporations.

That led one commentator on Japan Today to remark: “Saying “Abenomics” has stalled is like saying the clunking car you were pushing along because it had run out of gas came to a halt because you got tired of pushing.”

Renho is noted for her white suits and robust approach to bureaucracy.

In fact, she was part of the cabinet when the DPJ was in government in 2010. The Japan Times claims that at that time, Renho had several fierce, face-to-face battles with bureaucrats who she thought were wasting taxpayers’ money.

Despite the overall weakness of the DPJ, Renho’s personal popularity seems especially among female voters.

Her bid for party leadership comes at a time when gender is often debated in politics.

This year marks the 70th anniversary of women’s suffrage in Japan. After World War II, Japanese women won the right to vote and run for office. But, 70 years on, women’s representation in both houses of Japan’s parliament remains low by most statistical measures.

However, this year two other female politicians have been in the spotlight. One of them is Koike Yuriko who became the first female governor of Tokyo in the summer.

As Tokyo will host the 2020 Olympics it will make her one of Japan’s faces to the world.
Another high profile figure is the defence minister, Tomomi Inada, the woman dubbed in the Financial Times as “Japan’s Joan of Arc”.

There have been reports in the media that long before taking up the post of defence, Ms Inada said Japan should consider arming itself with nuclear weapons.

This week, it was announced that the Defence Ministry is requesting a record budget of 5.16 trillion yen (£39 billion) including money for new missiles, but not of course any armed with nuclear weapons.

If Renho manages to become leader of the opposition, she will no doubt wish to robustly question Inada on both the strategy and the cost of her proposals. 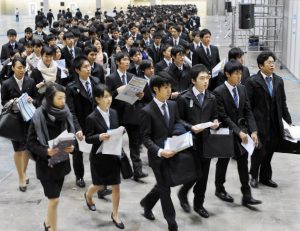 The Japanese Prime Minister Shinzo Abe, the Japanese Communist Party and the Bank of Japan all agree on one principle; the way Japanese people approach their work should change.

Labour reform is Japan’s “biggest challenge” according to Prime Minister Abe. When I met with representatives of the Bank of Japan in Tokyo recently they told me it is also Governor Kuroda’s top priority.

On the other side of the political divide is the Japanese Communist Party, which is fully committed to the opposition alliance aim to bring down the Abe government.

It describes workplace problems in stark terms: “Under the tyrannical rule of large corporations… workers are afflicted by long hours of work and excessively heavy workloads that could result in karoshi (death from overwork).”

The Communist Party complains about the problems of forced overtime, a lack of female participation in the workforce and a lack of job security. This strikes a chord with many hard working Japanese people and may explain why the party did well in recent elections and now has 14 seats in the Upper House of Parliament.

Death from overwork is rare but many people face hardship trying to balance their jobs with care for children or elderly relatives. An employee who hopes to rise in a corporation is often expected to work between 10 and 15 hours a day. Combined with commuting and afterwork socialising, that leaves little time for household work, the overwhelming amount of which is still done by women. Japanese men do some of the least housework of men in any developed country.

Foreign investors do not especially care if Japanese men clean the bathroom or do the washing up. But they are concerned that inefficient work practices hold back Japan’s economy. Take the view of Fisher Investments, an independent investment adviser with US offices in Washington and California. Its recent report on Japan complained about “protectionist regulations promoted by strong vested interests that discourage competition and a byzantine labor code that discourages companies from hiring new workers or effectively competing with each other.”

Mr Abe wants to change things. Earlier this month he unveiled a package which puts particular emphasis on helping workers who do not have secure full-time positions, including ensuring equal pay for equal work and raising the minimum wage.

These labour reforms form part of the third arrow of Abenomics – which is actually lots of little arrows, aimed at many targets.

The ultimate goal is profound social change within Japan, a process which is not easy to measure. 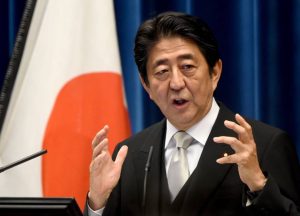 Japan’s finances are being pushed towards a cliff by a prime minister who is drunk on borrowed money.

These are two of the alarming images which were appeared in the international press this week to describe Prime Minister’s Shinzo Abe’s economic policy, Abenomics.

Abenomics is nearly always criticised by the foreign media for being neither innovative nor effective. The latest spending announcement from the prime minister was generally dubbed “disappointing”.

The general view in the foreign press is that fiscal stimulus packages, like the one announced this week, are part of a long-established, boring and unsuccessful attempt to solve Japan’s economic problems by spending borrowed money on wasteful projects.

The key criticism is that this racks up ever more debt for Japan and does not address fundamental issues with the way Japanese society is organised.

The fiscal cliff idea comes from the view that if Japan keeps spending like this, at some point the money will run out and Japan’s economy will face a precipice and then a terrifying, sudden fall.

The claim that the government is “drunk on money” comes from the idea that because the spending is of borrowed money, rather than money derived from tax, it cannot last. Barron’s Asia said Mr Abe is therefore like a drunk person high on a drug which makes his problems worse.

Despite being aware of such criticism, Prime Minister Abe continues to spend money on projects which he hopes will stimulate the economy and keep Japan out of recession.

The measures are popular among Mr Abe’s supporters.

Bloomberg explained that the latest spending package includes funds to provide better port facilities for cruise ships and to accelerate the construction of a high-speed maglev train line.

There is also a substantial sum to help with reconstruction following earthquakes.

And a large proportion of the money is specifically designed to help address the problems associated with an ageing population. For example, it will help to pay for child care for mothers who want to work. Getting more women to work is seen as one way of balancing the number of people who are retiring.

So in the minds of the Japanese, the real test of Abenomics is how well it fits together as a coherent set of policies which benefit the whole of society, including women and the elderly.

Few Japanese people regard it as a perfect solution to a complex set of challenges. But they accept it as a plausible approach even though it does nothing to reduce Japan’s mounting debt.