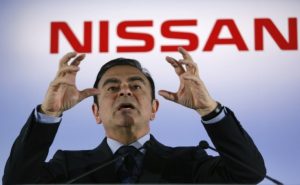 The boss of one of Japan’s major businesses has warned about the consequences of a so-called hard Brexit as Britain leaves the European Union.

Carlos Ghosn, the CEO of the car-manufacturer Nissan, said his company would need compensation for tariffs which could result from the change.

It was suggested by a BBC reporter that the tariff on cars exported from Britain to Europe could be ten percent.

Mr Ghosn responded by saying that would “without any doubt” have a harmful impact on Nissan’s factory in Sunderland.

Such high tariffs would also be a problem for all the Japanese companies which have manufacturing facilities in the UK.

Some of them might move their factories to other parts of Europe, as Japan Tobacco did several years ago.

However, the post-Brexit tariff of ten percent tariff which was suggested in the BBC interview was only speculation. It is not known at what level the tariffs will be set, as the negotiation process has not yet started.

Like the Japanese companies based in the UK, the British government wants any tariffs to be as low as possible. However, the level will be set not by Britain but by the European Union.

This week, I attended a meeting about the Brexit, along with about two hundred Japanese business people at the Japanese Embassy in London. We heard a speech by the British Trade Minister Lord Price.

He said that the UK government’s goal is a smooth transition to life outside the EU, with low tariffs and continued trade with Europe.

He also said the UK government is supportive of Japan reaching a free trade deal with the European Union.

When asked about the so-called hard Brexit, Lord Price said: “I think it’s just a phrase designed to illustrate an extreme point of view.”

Yet he also said there are a range of views within the government about how the Brexit should work. On immigration, for example, ministers have various opinions.

That is a concern for Japanese companies in the UK, who want consistency on immigration law and access to well-qualified, international staff.

Lord Price said that Japan is the largest Asian investor in the UK, and its investment in Britain is higher than that of China.

I asked him if there’s been a shift in the UK government relationship with China and Japan since Theresa May became Prime Minister. He denied this.

He also said he is looking forward to holding talks with Japanese business leaders in Tokyo later this month.