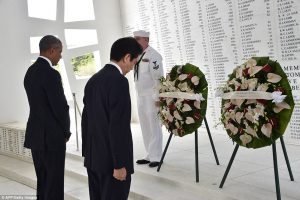 Japan’s Prime Minister Shinzo Abe has made a historic visit to Pearl Harbor in Hawaii, the site of a notorious attack on a US Naval base, which drew America into the Second World War.

Standing next to President Obama, Mr Abe offered his “sincere and everlasting condolences” to the victims.

“We must never repeat the horrors of war again, this is the solemn vow the people of Japan have taken,” he said.

The media have been analyzing Mr Abe’s motivation and contemplating the significance of the visit at the very end of President Obama’s time in office.

The role of explaining the Japanese government to the foreign press often falls to Tomohiko Tanaguchi, a special advisor to the Japanese cabinet. In fact, it was Mr Tanaguchi who read the English translation of Mr Abe’s speech at Pearl Harbor on international television. This important role suggests that Mr Tanaguchi took a hand in writing the speech and was determined to ensure it would resonate with an English-speaking audience.

In an interview with the BBC, Mr Tanaguchi explained that the prime minister had been contemplating the visit to Pearl Harbor since he addressed politicians in Washington in 2015. During that speech, Mr Abe stressed the theme of reconciliation between Japan and the United States and that was reinforced by the visit of President Barack Obama to Hiroshima in the summer of 2016.

Mr Tanguchi said that Mr Abe regards the alliance with the United States as “an alliance of hope.”

Donald Trump may see it differently. He has called into question many of America’s existing security deals, including its arrangements with NATO and with Asian allies such as Japan and South Korea.

According to the Wall Street Journal, Donald Trump ’s election in November triggered a wave of anxiety after he characterized Japan as a trade adversary which unfairly benefits from U.S. military protection.

The WSJ notes that the US is bound by a bilateral treaty to defend Japan from attack and is also Japan’s second-largest trading partner after China.

The chairman of the Japan Society and former British Ambassador to Japan Sir David Warren said that the Japanese would be deeply worried if the US weakens its commitment.

He stressed that East Asia is a volatile part of the world because of the threat posed by North Korea and he noted the strained diplomatic relationship between Japan and China.

The Japan Times praised Mr Abe’s Pearl Harbor visit but said there is  unfinished business for Japan with its former wartime enemies in Asia, in particular China and South Korea.

It also stressed that reconciliation must be part of a mutual process and cannot be achieved by one side acting alone.

Britain is asking Japan to build nuclear power facilities in the UK, five and a half years on from the Fukushima disaster.

Hitachi has been approached to build a new nuclear plant in Wales, in a deal backed by money from the Japanese government.

It follows on from a deal reached earlier this year for three nuclear reactors in the north west of England to be built by a consortium controlled by Toshiba.

The Welsh deal involving Hitachi is not yet finalised but Britain’s trade minister Greg Clark went to Tokyo this week to discuss it. The British finance minister, the Chancellor Philip Hammond, also spoke to Hitachi in Tokyo recently.

For Japan, investments in the UK fit strategically with its plan to build nuclear power plants worldwide including in China, India and the US.

Japan’s own nuclear reactors were entirely shut down following an accident at Fukushima 2011, following an earthquake and tsunami.

Although most plants have restarted operations, there remains significant resistance to nuclear power among many Japanese people and distrust of the government’s ability to manage nuclear accidents.

There is also an anti-nuclear movement in the UK. The pressure group Greenpeace warns of the possibility of leaks and radioactive pollution and says advances in renewable energy and a drop in electricity demand should make the new nuclear power plants unnecessary.

However, the British government is committed to building a new generation of nuclear power stations. It recently commissioned EDF of France to build the enormous Hinkley Point power station in the north England, the UK’s first new nuclear power plant in decades.

Hinkley Point will cost of $24 billion. It will be paid for with French and Chinese money.

For the British government, the extensive investment by Asian countries in its energy infrastructure is a boost, following the referendum vote for Britain to leave the EU.
The involvement of both China and Japan fits with the UK government’s strategy of promoting trade with both countries.
The Japanese deals are based on a different funding model to the Hinkley Point power station, which is totally financed from foreign money, including Chinese investment.

According to the Financial Times newspaper, the Hitachi project in Wales would be paid for by a mixture of British and Japanese government funding.

Jiji news agency suggests that loans to fund it would come through the Japan Bank for International Cooperation and the Development Bank of Japan.

Separately, Toshiba has teamed up with a French utility company, Engie, to build three Westinghouse reactors in Cumbria in the North West of England.

Reuters reports that the Korean company KEPCO would also like to invest in the Cumbrian project, backed by support from the Korean government. 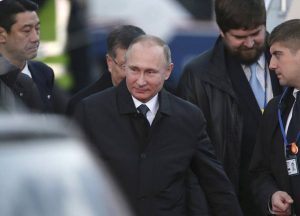 The Russian President Vladimir Putin flew into Japan on Thursday, the day he was pronounced the most powerful man in the world by Forbes.

His first stop was Nagato, the hometown of the Japanese Prime Minister, Shinzo Abe, where he stayed in a luxurious onsen spa resort. Mr Abe said he hoped the spa would refresh his guest as they prepared for two days of talks.

The aim is to settle a dispute between Japan and Russia over the Kuril islands, which lie to the north of Hokkaido.

Russia has claimed them as its territory since the end of the Second World War. Japan calls the islands its Northern Territories and would like them returned to its sovereignty.

The Japan trip enables Mr Putin to side step the intense criticism of Russia’s recent actions in Syria and its annexation of Ukraine in 2014, which resulted in international sanctions.

Russian support for the assault on the Syrian city of Aleppo, in which many civilians died, led Samantha Power, the US Ambassador to the UN to angrily ask: “Is there nothing that shames you?”

President Obama has said the United States must and will retaliate Russia for hacking which he believes was designed to interfere in the American election.

The White House has said a cyber attack would not have happened without Preisdent Putin’s personal knowledge.

Russia has dismissed the claims and hopes for a warmer relationship with the US follow the inauguration of President-elect Trump, who has said Mr Putin is someone he can do business with.

Mr Putin, too, has spoken of his desire to befriend the leaders of previously hostile foreign countries. Russia and Japan warred twice in the 20th Century but Mr Abe and Mr Putin have enjoyed a cordial diplomatic relationship and have met more than 15 times.

This week’s meeting represents “a rare opportunity for Japan and Russia to normalise bilateral relations and finally leave behind the legacy of the Second World War,” according to Yoichi Funibashi, founder of the Rebuild Japan think tank, who wrote an opinion piece for the Financial Times.

Mr Funibashi also cautioned Japan not to become an ally of Russia or to abandon its duty of “shoring up the liberal international order.”

Its contributors include Ilya Lozovsky who says he would welcome any deal over the islands which would benefit both Russia and Japan.

But Mr Lozovsky is scathing of Mr Putin, saying that although he may be “a tactical mastermind… strategically speaking, Putin has been a failure, having led his country for 16 years down a corridor that is gradually narrowing and darkening.”

That dark view of Mr Putin is rare in Russia, where most people watch state-controlled media. The President’s approval rating at home jumped from 81% in June to 86% in November, according to a Moscow-based research centre.

Mr Abe appreciates the conversations about the islands will be complicated. He told reporters the discussions will probably stretch into the night.

He may also be wary of an unequal balance of power with the visiting Russian strongman. While Forbes says Mr Putin stands tall as the most powerful man in the world, Mr Abe ranks at a lowly number 37 on its list. 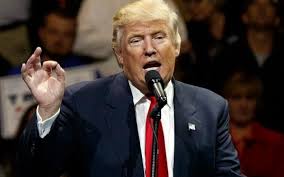 Two of Japan’s western allies have been sending messages about their policies in East Asia.

America’s president-elect Donald Trump has criticised China over trade and security and opened up an unprecedented dialogue with Taiwan.

Meanwhile, the British Foreign Secretary, Boris Johnson, has said Britain’s policy towards the region should not only be decided by trade and exports but also by the rule of law.

Mr Johnson said that Britain supports bids by India and “other countries” to become permanent members of the UN security council.

Mr Johnson said nothing directly about Japan in his speech but Japan has long aspired to be on the UN Security Council, even though China objects.

Mr Johnson used cautious language about China and stressed that Britain was one of the first Western countries to join the China-initiated Asian Infrastructure Investment Bank (AIIB).

China has substantial investment in the UK. But in fact, Japan is the largest Asian investor in Britain and accounts for around half of all Japan’s investment in Europe. Mr Johnson said the recent vote by Britain to leave the EU should not be seen as the UK turning its back on the world. He said that following the Brexit, Britain must be “more outward-looking and more engaged with the world than ever before.”

Mr Johnson delivered his message through an elegantly-crafted speech at Chatham House in London. President-elect Trump on the other hand used social media to Tweet his views on China.

He accused China of unfair trade practices and complained about its military activities in the South China Sea.

“Did China ask us if it was OK to devalue their currency” and “build a massive military complex?” he asked on Twitter. “I don’t think so!”

China regards Taiwan as a breakaway state and never calls its leader a president, instead referring to her as “a Chinese regional leader”.

China can hardly be surprised by Mr Trump’s approach. He was sharply critical of China during his election campaign. The Chinese media has been calm, noting that the US and China have long had “highly mutually beneficial” relations.

The BBC’s China Editor Carrie Gracie says China’s leaders must be wondering what will happen next in terms of its relations with the US.

Japan will be wondering that, too. However, Mr Trump’s friendly gesture towards Taiwan could be pleasing to Japan, which also wants to be friends with Taiwan and definitely does not share China’s animosity towards their neighbour.

Mr Abe was the first foreign leader to meet Mr Trump following his recent election success. That may signal that the US-Japan relationship is on a much better footing than the rather tense one that seems to be developing between America and China.