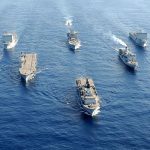 Britain is offering unprecedented levels of military support to Japan in the wake of the growing threat from North Korea and tensions with China.

In addition, defence and cyber security companies from the UK are collaborating to help defend Japan against hackers and terrorists.

The arrangements were announced by the British Foreign Secretary Boris Johnson and the Japanese Foreign Minister Taro Kono.

The ministers reaffirmed that the UK and Japan are each other’s closest security partners in Europe and Asia respectively. Although the British government prefers not to use the word “alliance” when referring to Japan, some commentators have described the relationship as a “semi-alliance.”

During a trip to the National Maritime Museum in London’s Greenwich, the ministers discussed the UK-Japan alliance which existed at the beginning of the 20th Century. Afterwards, Mr Johnson said: “Looking at the maritime history of the countries and the identity that we share, it’s confirmation again that we have the same values, the same outlook and increasingly the same interests in the world.”

Mr Onodera welcomed Britain’s military support and described North Korea as “a most urgent and important threat.” He warned that Japan would never accept a nuclear-armed North Korea and said that both the UK and Japan believe that upholding the rule of law is the “top priority for democracy and security in the region.”

Foreign Secretary Johnson said that “Japan and the UK really do see eye-to-eye” on North Korea. He said the best way forward is to ramp up the economic pressure on North Korea and “the people who can really do that are the Chinese.”

“The military options don’t look at all attractive,” said Mr Johnson, “that is why we want to see an international diplomatic effort.”

Japan and the United Kingdom are co-developing a weapon known as the Joint New Air-to-Air Missile (JNAAM). Live fire testing is expected to begin in 2018. According to Francis Tusa, Editor of Defence Analysis, it is a rare example of Japan working with a country other than the United States on a defence project. He believes Japan chose the system because of its compatibility with its aircraft. However, he does not expect the collaboration with the UK to dent the alliance between Japan and the United States.

“The US and Japan are very tight and it is hard for another country such as the UK to disrupt that relationship,” says Mr Tusa. “There are around 15,000 US marines stationed in Okinawa and around 250 US military planes in the region. What would Britain send to Japan in the event of a conflict with North Korea? Maybe only 14 planes and how long would they take to get there?” asks Mr Tusa.

Japan is seeking to boost its defence capacity following a series of ballistic missile launches and nuclear tests by North Korea and increased Chinese activities in the East and South China Seas.
Foreign Minister Kono told reporters in London that the North Korea’s intercontinental ballistic missiles can reach not only South Korea and Japan but also other parts of Asia, the United States and Europe and therefore represent a new and dangerous threat to the international community.
Japan also fears sea and air clashes with China in disputed areas of the East China Sea.

In response to the rising tension, Japan’s Ministry of Defence has requested a record budget of 5,255 billion yen ($48 billion) for 2018. Francis Tusa says: “The Chinese are spending a huge amount of money on defence, building up to six new aircraft carriers, so I’m not surprised that a bit of an arms race is developing in the region.”

In response to the growing threat of malicious cyber activity, the Japanese and British ministers agreed to strengthen cooperation in the field of cybersecurity and will hold a conference on the issue in February 2018. They confirmed that the UK and Japan would pool information in order to deter or mitigate malicious cyber activities.

In the spring of 2017, Britain’s National Health Service was hit by a cyber attack which was launched from North Korea, according to Britain’s National Cyber Security Centre.
Francis Tusa of Defence Analysis says: “You need many friends to counter cyber attacks. I don’t think any one single country has all the technology and resources needed to tackle the cyber problem. You need big data and many experts to combat the threat.”

British ministers hope that some of the increased defence spending by Japan will flow to UK arms companies which are seeking valuable contracts to secure jobs in manufacturing and technology.
Britain is aiming to deepen its trading ties with major economies outside Europe such as Japan and China as the UK negotiates its exit from the European Union, the world’s biggest trading bloc.
The China factor

The Two Plus Two summit with Japan in London took place simultaneously with another top level set of talks involving senior British politicians in China. The British Chancellor (Finance Minister) Philip Hammond and the Business Secretary Greg Clark were in Beijing for the UK China Economic and Financial Dialogue. The British government said that meeting secured more than £1bn ($1.3 bn) of trade and investment deals with China.

“Don’t expect Shinzo Abe to try to change the constitution before the Olympic Games,” a senior Japanese government official told me privately this week. He explained that the Prime Minister’s long-cherished plan of removing the clause in the constitution which commits Japan to a form of pacifism would be put on hold until after the 2020 games.

Mr Abe originally set 2020 as the deadline for constitutional change.

My contact explained that the Prime Minister is treading cautiously because of domestic politics, international diplomacy and economics.

“I want to make the Olympics a trigger for sweeping away fifteen years of deflation and economic decline.” Shinzo Abe

Domestically, Mr Abe requires the support of a two thirds majority in both the upper and lower houses of the parliament before he can seek its approval for constitutional change. At the moment, the numbers are on his side but he needs continued backing from both houses.

Although the opposition parties are weak, the constitution is an issue upon which they hope to draw public support. Resistance to changing the so-called pascificist clause, known as Clause Nine, remains strong, if the many recent surveys on the topic are to be believed. A final change would need approval through a referendum.

That means that if the Prime Minister wants to press for reform the constitution, he will need to debate the policy in the glare of the media. According to my friend in the government, this is not something Mr Abe wishes to do as he tries to rally the country around the Olympic flag.

Furthermore, China and South Korea are critical of Mr Abe’s plan to change the constitution and to allow Japan’s armed forces to fight abroad. Both nations have bitter memories of being occupied by Japanese soldiers in the first half of the 20th Century.

The Olympics offers an opportunity for Japan to build friendly relations with its neighbours through sport. Reigniting the debate about the region’s history of conflict would send the wrong diplomatic signal entirely, according to my source.

Another issue is Mr Abe’s plan to revive the economy, known as Abenomics. The economy is improving partly because of all the spending associated with run-up to the Olympics. The games also offer Prime Minister Abe an opportunity to broadcast to the world his key political slogan “Japan is back.”

When he learned that Tokyo had won the honour of hosting the games, Mr Abe said: “I want to make the Olympics a trigger for sweeping away fifteen years of deflation and economic decline.”

The enormous publicity value of a big sporting tournament was made clear by the success of the World Figure Skating championships in Nagoya last week.

It attracted star athletes from China, South Korea, Russia and many other countries to compete alongside Japanese stars. Japan gains great prestige when it hosts international sporting events which are shown throughout Asia on television. 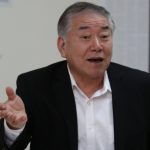 Japan and South Korea are pressing the United States to step up the diplomatic effort to prevent war with North Korea.

South Korea’s ambassador-at-large for international security affairs, Chung-in Moon, has said that President Trump should send an envoy such as the former national security advisor Steve Hadley to try to dissuade the North from further missile launches and nuclear tests.

Professor Moon was speaking after North Korea launched another long-range rocket over Japan.

Following the launch, Japan’s Prime Minister Shinzo Abe said in parliament: “In order to press North Korea into changing its policies, we shall take a resolute attitude in our diplomacy,” but he also said “dialogue for the sake of dialogue is meaningless.”

A former Japanese ambassador to the United States and the United Nations, Ichiro Fujisaki, has warned that the Americans have become “very serious” over the North Korean issue because they recognise its missiles may soon be able to reach the US mainland.

Mr Fujisaki told the BBC: “Mr Trump has been very clear he will try to defend Japan, so we are putting some confidence on this US position. The US is very serious this time on nuclear deterrents and this was not the case about 40 years ago, if I may say.”

This week, tens of thousands of South Korean and American personnel have been involved in joint military exercises. They included simulated air strikes on ground targets. The North has called it “an all out provocation.”

Ambassador Moon said that the South Korean president Moon Jae-in is “desperate to avoid war” but if there was a conflict, any decision on military action must be taken jointly between South Korea and the US.

“If America fights, America wants to win but in order to win, they will need to commit ground forces. Those ground forces would be drawn from the South Korean army,” he warned.

In an on-the-record discussion at Chatham House, Professor Moon proposed that London could host a new round of negotiations involving six parties: South Korea, North Korea, the US, China, Russia and Japan.

Professor Moon said the latest missile launch could well have been deliberately designed to escalate matters. “It’s not irrational – it’s very rational from their point of view,” he said.

North Korean propaganda claims its weapons programme is needed to protect the Supreme Leader Kim Jong-Un, to protect the state’s institutions and to protect its people. Professor Moon said that these motives combine with a quest for domestic political legitimacy and a desire for international recognition.

Professor Moon said that further sanctions which could lead to the complete isolation of North Korea would be counter-productive.

He claimed that President Putin of Russia has said that the North would continue with its weapons programme “even if the people have to eat grass.”

Professor Moon said: “If we close all ties with the North, there is no way we can influence it other than creating a humanitarian disaster.” He also cautioned against shutting down all channels of communication with potential opponents of Kim Jong-Un.