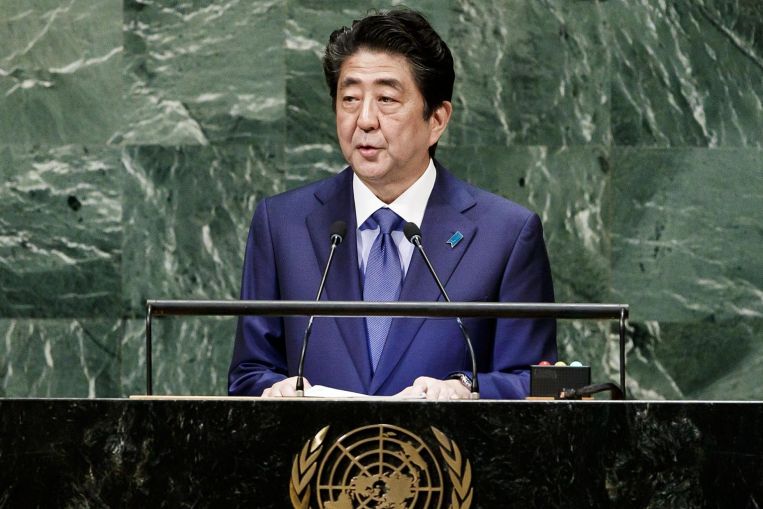 Why isn’t the Japanese Prime Minister Shinzo Abe at the centre of the discussions aimed at reaching a peaceful solution on the Korean peninsula?

The New York Times says that Mr Abe is being sidelined. It quotes Terry Ito, a commentator on Nippon Television, from Tokyo, that “the possibility of the US thinking about Japan is zero.”

Mr Abe will encourage President Trump to bring Japan to mind when they meet at the United Nations this week.

Mr Abe is one of the most skilled diplomats in Asia and a person who has spent much of his political career considering the North Korean crisis. He can be expected to keep a cool head during complex discussions and to ensure the most important issues are addressed.

But I think there are two reasons why his presence might not be welcomed at the peace talks, particularly if the North Koreans themselves are taking part.

The first is that an issue which is crucially important to Mr Abe, the return of Japanese citizens who were abducted by North Korea in the 1970s and 1980s, is not so important to other countries such as the United States and South Korea.

Prime Minister Abe believes the abduction issue must be resolved as part of the peace process. He has offered to meet the North Koreans directly to discuss it but they have refused.

Nevertheless, there are signs negotiations are taking place behind the scenes. The Washington Post reported a secret meeting between Japanese and North Korean officials in Vietnam in July.

The second reason Mr Abe might not be welcomed is that he has some very tough questions aimed at ensuring the North Koreans don’t renege on their promises, as they often do.

His goal remains exactly the same as he outlined in September 2017.

“We must make North Korea abandon all nuclear and ballistic missile use in a complete, verifiable and irreversible manner. If North Korea does not accept that, then I am convinced there is no way forward other than to continue maximum pressure on it using every possible means,” Mr Abe said in his election victory speech.

Prime Minister Abe demands proof that North Korea is ready to change from a path of aggression to one of peace. He wants more than rhetoric and photo-opportunities.

This stirs anger in North Korea. Its official propaganda outlet, the Rodong Sinmun newspaper recently wrote: “Japan has been left alone in the region, as a country of pigmy politicians ­engaged in an abnormal view on things and phenomena, anachronistic thought and stupid and unbecoming conduct.”

The North Koreans appear to be lashing out at the Japanese because they are trying to prevent them from making empty promises. That should be a signal to the other participants in the negotiations that Japan has a crucial role to play. 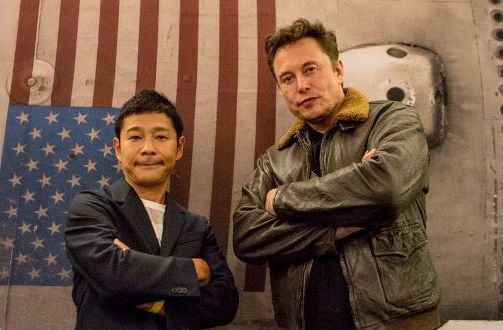 The world’s media have been delighted by the news that a Japanese billionaire is heading on a trip around the Moon, in a rocket built by the Tesla boss Elon Musk.

Because my hobby is collecting old records, I am particularly impressed that Yusaku Maezawa started his life in business as a record and CD collector.

According to Metro Mr Maezawa was in band when he was young and instead of going to college, decided to head off to the United States with his girlfriend to collect records which he sold back to Japanese people through a mail order business.

According to Forbes, his net worth as of May 2017 was $3.6 billion. Which is pretty paltry compared to Elon Musk’s reported $20.7 billion.

I am also rather disappointed that my record collecting has not helped me take the first rungs on the ladder up to the super-rich league.

Maezawa San is still in the mail order business and he now focuses on fashion. His website Zozotown offers a range of clothes which cost less than 100 dollars.

One way of ensuring you get the right size is to send off for a “Zozo Suit”.

Fashion United informs its readers us that these “dotted bodysuits allow a smartphone camera connected to a Zozo app to take precise measurements of the customer so that a suit can be sent to them which will be a perfect fit.”

Although few people know of this service until recently, Mr Maezawa’s rocket adventure should ensure it gets massive publicity.

“Unfortunately up until now, our business has been domestic. We haven’t been able to do anything globally,” he said. “I am happy that we now have the chance to bring this service to 72 countries.”

The art of space

Mr Maezawa, is now more of an art collector than a record collector. He has said that he will be inviting artists to join him on his 2023 trip around the Moon.
They will have plenty of time to discuss ideas. According to Mr Musk the rocket trip will last around six days. It won’t land on the moon’s surface but should fly right around it before bringing the passengers back to earth.

There are of course a number of risks associated with the project in general and with Elon Musk in particular – and the media have been keen to highlight some of his recent eccentric behaviour.

Another warning came from Mr Musk himself. Before he introduced Maezawa, he warned of the impending “end of civilization” adding “we should take action and become a multi-planet civilization as soon as possible.” 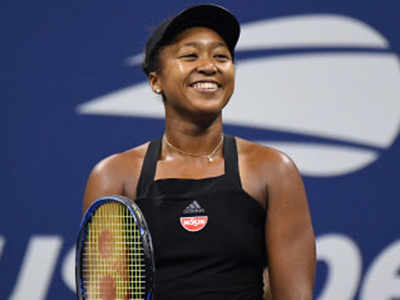 “How do you say it was difficult?”

That was the English question Naomi Osaka asked when talking to a reporter from Japan about her victory in the final of the US Open tennis championship.

“Muzukashii” replied the reporter. “Yes, it was muzukashii,” replied Naomi.

It was something of an understatement. To beat the legendary Serena Williams in straight sets at one of the most important sports events in the world was a huge achievement.

Prime Minister Shinzo Abe praised Naomi for raising the spirits of a country plagued by severe weather events this summer, including typhoons and an earthquake.

The media is curious about her background.

Naomi Osaka was born in Japan to a Japanese mother and a father from Haiti. Some Japanese media reports said her mixed race identity made it hard for her to be accepted as a young child and that was one of the reasons the family moved to America when she was three years old.

The South China Morning Post says that people of mixed descent or from ethnic minorities “often face discrimination in Japan”. It suggests that people with Japanese and Caucasian parents have typically been welcomed but people of African or other Asian descent encounter prejudice.

Discrimination is hard to measure but perhaps sometimes it creeps into the language which people use to talk about race in Japan.

Not half but double

One of the words which sometimes irritates people who have international parents is the word hafu, which comes from the English word “half”. Some people feel is implies that mixed race people are not “whole”.

I remember a discussion about this on Japan Today in which a mixed race person took issue with the phrase “hafu”. He said: “I am not half: I am double – one scoop of vanilla, one scoop of green tea.”

Perhaps Naomi Osaka’s great tennis victory will help to counter any negative perceptions of people who have a mixed racial heritage. 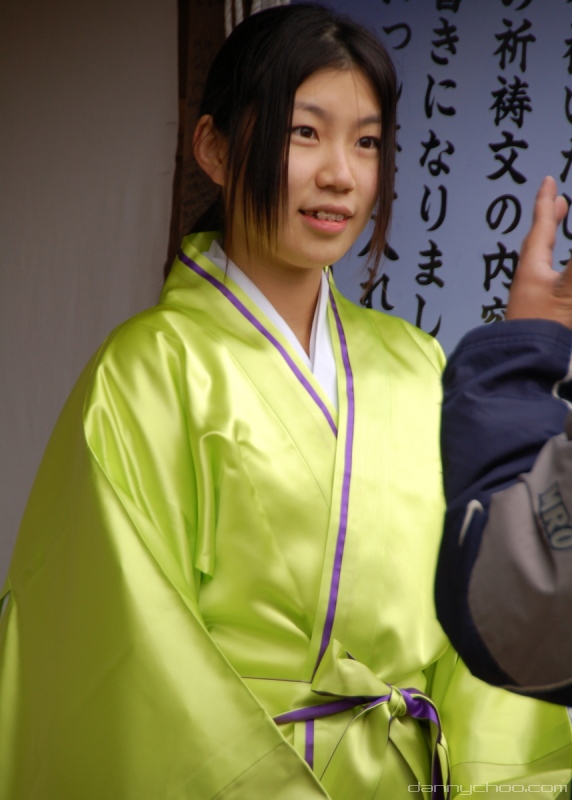 This week, the Financial Times – which is usually very balanced in its coverage of Japan – ran a piece with a headline condemning “Japan’s culture of discrimination” against women.

For example, the Diplomat recently ran an article about Japan’s “embarrassing ranking” in the latest global gender gap index. Apparently, it  ranked 111th out of 144 countries, just behind Ethiopia and Nepal.

Actually – as is often the case on the website version of newspaper pieces – the headline in the FT suggested more drama than the actual article.

The piece was by the Tokyo Bureau Chief, Robin Harding and Kana Inagaki, a female correspondent who was brought up in the US. They explained that there has been slow progress in the number of high level managerial jobs obtained by women in Japan, despite a push by Prime Minister Shinzo Abe to open up the boardrooms of large organisations to women.

This policy is known as Womenomics. Everyone in Japan is familiar with the term.

Although women may not be making the board very often, they are working more. The FT article also makes the point that a sharp increase in the rate of female employment has been an important factor in terms of the country’s recent strong economic growth.

That reminded me that until fairly recently, most women in Japan would have regarded it as crucially important that they were able to marry and have a family before considering what they might do as a job.

I was discussing this issue with friends the other day when a Japanese woman asked me whether I, as a foreigner, thought that Japanese women “look unhappy” about their work situation.

A glance around the table suggested no such thing.

We were having lunch with a family in which the mother has a full-time role caring for two young children and the father has a stimulating and well paid job at a university.

All four of them looked extremely happy and close.

My friend’s question left me wondering about the most helpful way to think about gender in a country like Japan. Is it appropriate to judge Japanese women harshly for being less “successful” than women in other countries?

I often hear women in Japan say that they have little wish to be burdened with the heavy obligations, long hours and boring meetings which go with senior roles in big companies.

That’s not to say that they don’t want to work hard or to be leaders: it’s more that the idea of being a “salaryman” of a different gender doesn’t sound particularly appealing.

Ask women if they’d like a well paid exciting job, though, and most of them say yes – provided they also have the freedom to pursue their own interests and, in many cases, have time for a rewarding family life.

I think the best way for an outsider to understand the role of women – and men – is to try to gain a feel for the value system which guides Japanese society.

Otherwise, there’s a danger that foreigners will go seeking signs of discrimination – whereas in fact most women are asking themselves how they can best find happiness, in accord with their personal values and social expectations.