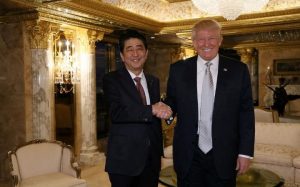 Mr Abe said he has great confidence in Mr Trump. He described their talk as candid and with a warm atmosphere.

There was very little information disclosed to the press about what they spoke about, which led to the media speculating on what subjects would have been important to them.

One of the main ones would have been the US military presence in Japan. There are around 50,000 American soldiers based in Japan. Many of them are stationed in Okinawa, where local people have often complained about their presence.

However, Mr Abe has supported Japan’s defence alliance with the US and has sought to maintain a good relationship with President Obama.

During the election campaign, Mr Trump challenged the amount of money the US spends on its military presence in Asia. He has even floated the idea that Japan and South Korea should develop their own nuclear weapons to counter the threat from North Korean missiles.

Speaking after the meeting, Mr Abe said: “I believe that without confidence between the two nations the alliance would never function in the future and as the outcome of today’s discussion I am convinced Mr Trump is a leader in whom I can have great confidence.”

Another subject which may have been on the agenda for the meeting was the Trans Pacific Partnership, known as TPP. This is designed to create a free trade area involving both Japan and the United States and Mr Abe’s been strongly backing it, despite some political opposition within his own party.

In the election campaign, Mr Trump said he would scrap TPP and Hilary Clinton also cast doubt upon the deal. In essence, Mr Trump believes that such trade deals threaten the jobs of American manufacturing workers by opening them up to competition from countries where wages are lower. For this reason, he also threatened tariffs on manufactured imports, such as Japanese cars.

However, most of the Japanese cars which are sold in the United States are actually manufactured there and Toyota has invested heavily in its US factories and its American staff.

Michael Pillsbury who has been advising Mr Trump on Foreign Policy told PBS Newshour that Mr Abe’s meeting with Mr Trump was due to the initiative of Japan and the leaders of India and other countries could be jealous that he was the first in the line. Mr Pillsbury also praised Mr Trump for taking the opportunity to “educate himself” about other countries.

The editor of Foreign Policy magazine Donald Rothkopf told the same programme that everything Mr Trump does or says is being watched carefully and everything has a consequence for America’s relations with the rest of the world.