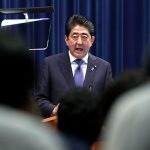 Is it true that Japan needs of an election to deal with a “national crisis?”
That’s the claim made by Prime Minister Shinzo Abe, who has called a snap election to take place soon – probably on October 22nd.

The escalating threat from North Korea could well be seen as a “crisis” situation.
Domestically, however, things are calm in Japan. Its economy is growing at the fastest rate for two years. Unemployment is very low and by many measures, it remains one of the richest and most peaceful countries in the world.

The Asahi Shimbun newspaper, which is not generally supportive of Mr Abe or the ruling Liberal Democratic Party (LDP), says the prime minister’s opponents were “left flustered” by his portrayal of Japan as a nation in crisis.

The Asahi says suggests that Mr Abe is dissolving the Lower House of the parliament in order to avoid questions about political scandals and allegations of corruption.

However, the widespread view in the press, supported by a poll by the Nikkei newspaper, is that Mr Abe is in a good position to win the election because the opposition parties are so weak. Mr Abe’s LDP is supported by 44 percent of voters, with the opposition Democratic Party of Japan on only eight percent.

The Financial Times suggests that Mr Abe will fight a populist campaign, aimed at exploiting a weak opposition rather than winning a mandate for painful economic reforms or drastic constitutional change. For example, Mr Abe has said there’ll be a big push to provide free childcare for three-to-five-year-olds, paid for partly by a rise in consumption tax in 2019.

Another candidate for the role of Japan’s prime minister – the governor of Tokyo, Yuriko Koike – may be better placed to claim the populist ticket.

Although Ms Koike’s background is in the LDP, she presents herself as a challenger to the vested interests and the status quo. She has named her new political party Kibo no To (“Party of Hope”).

So for many voters, the election presents a choice between returning Mr Abe for a fourth term or voting for change and Japan’s first female prime minister.

The press often portrays Mr Abe as a nationalist, provoking bad feelings with Japan’s neighbours, China and South Korea. A detailed profile of Mr Abe was prepared by AFP and ran in the Daily Mail under the headline: “Shinzo Abe – Nationalist blueblood at home, shrewd diplomat abroad.”

It points to his efforts to build relationships with Donald Trump and Vladimir Putin, while pushing a nationalist agenda domestically.

Another question is whether his policy of Abenomics, designed to restore Japan’s economy, is working. With recession now out of the picture and activity related to the 2020 Olympic Games ramping up, the situation looks bright.

And Abenomics is set to continue, especially its first two “arrows”. That means more massive economic stimulus through public spending and no tapering of the expensive asset-purchasing scheme, conducted by the Bank of Japan.