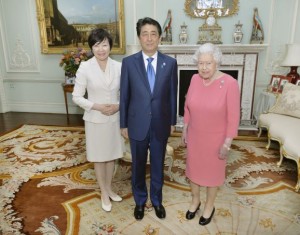 Shinzo Abe used the words from Winston Churchill when speaking to reporters in London.

“We must take action before the world gets bogged down in a crisis,” he said.

The “crisis” that he fears is linked to a global economic slowdown. In Japan, that slowdown could soon drag the country back down into recession.

I was invited to a meeting with Mr Abe at smart London hotel. It was a good opportunity for me to hear directly from the prime minister about his concerns.

In London, he met the current prime minister, David Cameron, at 10 Downing Street.

In the afternoon, he went to Buckingham Palace for an audience with the Queen. In the evening, he went to the Prime Minister’s official residence, Chequers, where he spent the night. Mr Cameron said the more informal setting would be a good place for the two leaders to have constructive talks about difficult foreign policy issues.

Japan will soon host a summit meeting of the leaders of the G7 countries on the island of Ise-Shima. Japan is the chair of G7 this year and Mr Abe wants to raise its international profile.

So in preparation for the summit, his European tour has taken in Belgium, Italy, France, Germany, the UK and Russia, even though Russia is not a G7 member.

Mr Abe said an Abenomics type approach to economic growth would be good for the world. This would include fiscal and monetary stimulus as well as a programme of structural reform.

These policies are widely advocated in parts of Europe, but Britain’s Conservative government rejects the idea of fiscal stimulus. In the UK, government spending is being reduced as part of an austerity programme.

Many of the questions put to Mr Abe by reporters were about Japan’s relationship with Russia. Mr Abe pointed out that there has not been a proper peace treaty between Russia and Japan since the Second World War – a situation he called “regrettable”.

Russia and Japan dispute the ownership of a group of small islands that lie to the north of the Japanese mainland but Mr Abe said that he hopes his talks with Mr Putin will improve relations.

He was also asked about the rising value of the Japanese yen, to which replied “Any drastic fluctuation on the exchange rate will have a major impact on the trade of Japanese companies, which is not desirable.”

And when questioned about the forthcoming referendum on whether Britain should remain a member of the European Union he said: “A vote to leave would make the UK less attractive as a destination for Japanese investment.”