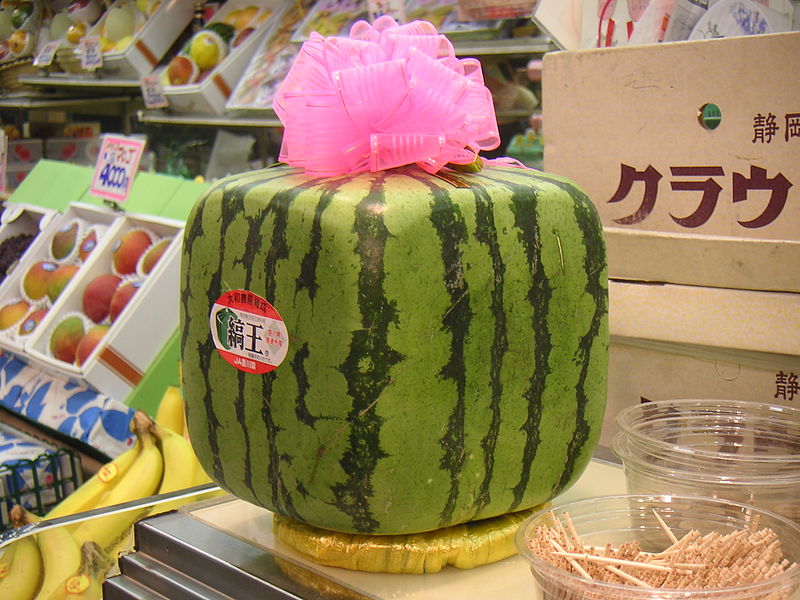 For the past few days, my mind has been fixated on watermelons. You can buy watermelons all over the world, of course. But I want to eat them in Japan, as it seems to me that they are particularly delicious there.

They can also be very expensive. And to my surprise, a lot of people say they like to eat them with salt. Even more surprisingly, some watermelons in Japan are not round but square. Would you like to know why? Well the internet has plausible theories on all these issues.

When it comes to price, it’s not only fruit in Japan which can seem expensive. Many vegetables, as well as special types of meat and fish, are pricey. On The Travel website, Lacy Womack notes that visitors to Japan “might experience some serious sticker shock when they visit the produce department” in shops.

Lacey says that’s because some consumers are very demanding and also because farmers like their fruit to look perfect. There are only limited supplies of the most premium products and of course fruit doesn’t last for long, hence the high prices.

I can imagine dollar signs appearing in the eyes of foreign farmers when they hear that in Japan, a few peaches can go for up to ¥3,000 ($300) and a big bunch of grapes can be sold for up to ¥5,000 ($500). But I think that’s only for fruit which is grown in Japan: imports don’t have the same appeal. And those inflated prices are only charged in a few high end shops, not in your average supermarket or konbini convenience store.

But why eat watermelons with salt? Martin Schneider, a frequent traveller to Japan, told Quora: “Adding a bit of salt to any sweet dish will cause additional taste buds (the ones for ‘salty’) to fire when that food is in your mouth. If the dose is right, you won’t taste much of the actual salt – instead the taste signal level will make the sweet signal even more intense for your brain.”

Martin points out that watermelons are a seasonal food in Japan, almost always consumed on hot summer days. Therefore, if you’ve been sweating, your body will crave salt, and that will make eating a watermelon extra satisfying.

Other Quora users say that watermelon and salt is also a popular combination in Vietnam. And Amit Kaushik suggests “try it the Indian way for an even better taste: sprinkle some black salt and chat masala on your melon.”

Out of the box

It’s also possible to find watermelons in Japan which are shaped like cubes or hearts and pictures of these are popular on Instagram. Wikipedia reveals that cube watermelons were intended to fit more compactly into fridges and were invented by a graphic designer called Tomoyuki Ono in 1978.

How do they get their shape? Well, apparently the melons are grown in boxes and take the shape of the container. But to my dismay, Wikipedia says they taste horrible. “To retain the proper shape, cube melons must be harvested before they are ripe, rendering them inedible.” What a shame!

It is of course easy to take the flesh out of an ordinary round melon and cut it into attractive shapes such as hearts or cubes. I think I’ll do that next time I get one in Japan but I’m not planning to douse the fruit in salt.

Sadly, watermelon season seems a long way off at the moment. I am locked down in Europe, with no immediate opportunity to fly back to Japan. For now, I’ll have to manage my cravings. I’m dreaming of a real feast when the crisis is over, if not this summer, then hopefully the next.