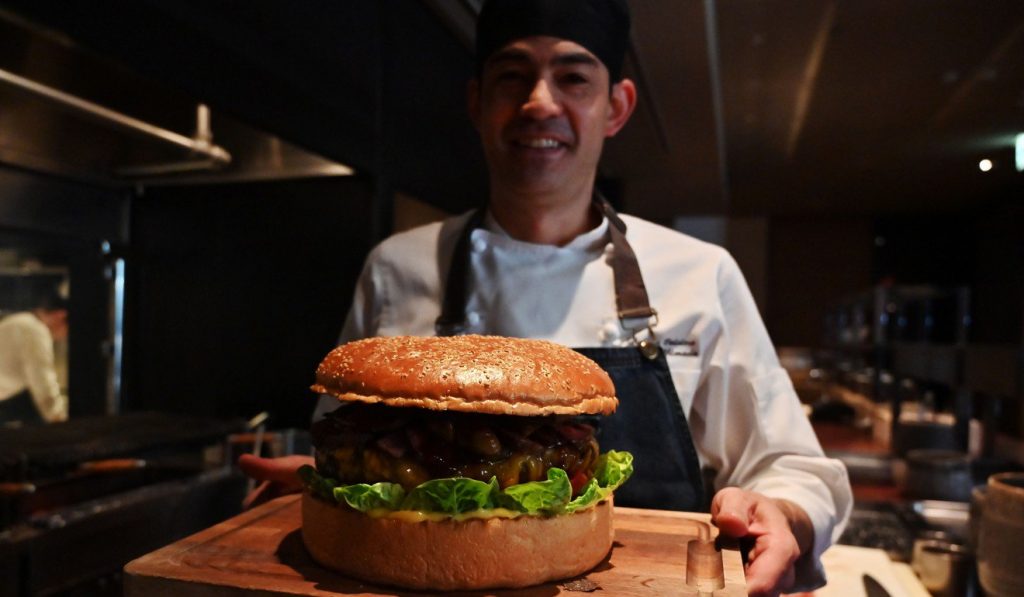 I’ve often wondered why in a land of beautiful food, like Japan, people want to eat burgers and chips.

This week, I am especially wondering why anyone would want to eat a burger which weighs three kilograms and was apparently created with patriotic pride as Japan enters a new era of “beautiful harmony.”

A chef called Patrick Shimada has made the enormous burger using beef made from Wagyu cattle, which according to legend, enjoy drinking beer and receiving massages from their human masters, in order to keep their bodies tender.

The meat is served between gold-dusted buns and is also “topped with foie gras and freshly shaved black truffles.”

“Myself in a bun”

Chef Shimada workers at the Oak Door steakhouse in Tokyo’s Roppongi district, near my former home.

He says he created the burger to mark the crowning of the new Japanese emperor, Crown Prince Naruhito. It’s the sort of rather crazy story about Japan which the media love and it’s obviously been stoked up by a clever press officer.

The press release came with some nice pictures of Mr Shimada preparing the dish, along with quotes, such as: “We wanted to do something to celebrate the new emperor and a new era for Japan.”

Mr Shimada, a fourth generation Japanese American, said: “It also gets me more in touch with my Japanese roots.

“Doing this through an American-style burger using Japanese ingredients – it’s kind of like myself in a bun.”
MOS burger

I actually think that the food in fast food restaurants in Japan is nicer than in many other countries and the service is great. My personal favourite is the Japanese chain, MOS Burger.  According to its website, its corporate goal is to “make people happy through food.” It says it provides “safe, healthy and delicious food” with “cordial service and a smile.”

MOS Burger is more Japanese in atmosphere than the big players, McDonalds and Burger King, which are in the process of are opening yet more restaurants in Japan. McDonalds already has around three thousand branches around the country.

It might seem odd to open more, given Japan’s falling birthrate and changing dining habits. However, according to the business newspaper the Nikkei, the hamburger business is one of the few bright spots in an otherwise bleak restaurant industry.

McDonald’s aims to open as many as two hundred new branches in the next three years and Burger King aims to triple its Japanese locations by 2022.

The Nikkei also says the burger joints are hoping to target the many tourists who visit Japan, including large numbers of visitors from other Asian countries.

These people, says the Nikkei, include “a steady stream of fresh customers looking for familiar flavours in an unfamiliar land.”