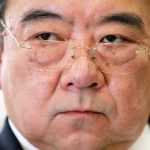 A lack of trust and an underlying threat of violence are harming China’s relations with Japan, according to Japan’s former ambassador to Beijing.

Masato Kitera represented Japan in China from 2012 until 2016.

He claims that when Chinese people tell him collaboration creates a “win win” situation, he hears them saying to Japan “we win.”

“I don’t believe it when the Chinese say win-win. I’ve heard it many times. China often says the relationship is advantageous for both Japan and China. But when Chinese people say win-win my ears only hear we win.”

Mr Kitera said that at the start of his tenure as ambassador there was a wave of violent anti-Japanese protests in China, including attacks on the Japanese Embassy and Japanese-owned factories.

He said that when he called on Chinese leaders to denounce the violence “no-one agreed with me.”

Mr Kitera, who is now Japan’s ambassador to France, was speaking at Chatham House, the Royal Institute for International Affairs in London.

He was taking part in a debate on whether China’s economic growth was an opportunity or a challenge for Japan.

“I see it as both,” he said, noting that although Sino-Japanese diplomatic relations are cool at the moment, the Chinese government nevertheless encourages ongoing Japanese investment to stimulate its economy.

More than 23,000 Japanese companies operate in China, employing more than 10 million people. Mr Kitera said that for that reason, the economic relationship is important to both countries. He said he would encourage Japanese companies to invest long-term in China in order to “gain leverage.”

Ambassador Kitera said that Japan’s investment in China in the 1970s and 1980s had formed the basis for its economic transformation. “Today’s economic development would not have been possible without Japanese support,” he said.

However he said that Japanese investors in China should “be mindful of the risks” and he said that President Xi Jinping’s recent claim that China was a champion of free trade was “met with an ironic smile.”

He claimed that tariffs and duties are applied inconsistently, creating pressures on Japanese businesses operating in China.

The speech met with a robust response from Mr Kitera’s fellow panellist at Chatham House, Professor Jia Qingguo from the Department of Diplomacy at the School of International studies at Peking University.

“I don’t like it when you say you never believe what the Chinese people say,” Professor Jia told Ambassador Kitera. “It’s like a joke. Maybe some people don’t say what they mean but this is not a fair statement. A lot of people – when they say “win win” – they mean it.”

Professor Jia pointed out that many Japanese companies choose to remain in China, despite the complex relationship.

“China and Japan were enemies and now we are at peace. We co-exist peacefully,” said Professor Jia. “We are economically interdependent. Our relationship has its problems but I believe it is still a win-win relationship.”

The panel on China was part of a conference at Chatham House entitled Anglo-Japanese Cooperation in an Era of Growing Nationalism and Weakening Globalization. The event was on the record and the discussion was moderated by Isabel Hilton, the editor of chinadialogue.