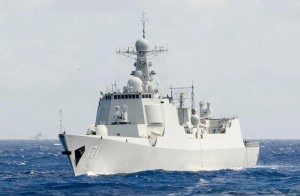 China has been harshly criticised again by the Japanese government, reinforcing the negative impression of China that is widely held in Japan.

The Japanese criticism came after a Chinese navy warship  sailed close to a group of islands in the seas between the two countries.

These islands, known as Senkaku in Japan and the Diaoyu in China, have long been a source of dispute.

“We are worried that this action raises tensions to a higher level,” Japan’s Chief Cabinet Secretary Yoshihide Suga told a press briefing in Tokyo.

Any confrontation between China and Japan over the islands receives a great deal of media attention in Japan, mainly due to fears that it could lead to an armed conflict.

As the story spreads worldwide via agencies such as Jiji Press, it suggests to an international audience that the tension between Japan and China is rising to a dangerous level.

The Chinese media also fans the flames of fear. According to CBS, stories about China’s claim to territorial rights in the seas off the coast of Japan have flooded Chinese state television recently.

As well as the arguments about territory, Japan and China often still clash over their interpretations of the history of the 20th Century.

China continues to criticise Japan for its imperial past even though the Japanese feel that they have repented and apologised.

This week, there was a stark reminder of the war. A Japanese company that used Chinese forced labour in its coal mines during the Second World War agreed to compensate and apologise to thousands of victims and their families.

Mitsubishi Materials, one of dozens of Japanese companies that used labourers from China and the Korean peninsula, said it would pay 100,000 yuan (US$15,000) to each of the surviving victims and the families of those who died.

Despite problems stemming from history and territorial disputes, at a business level, the links between China and Japan are strong. A record number of Chinese tourists are visiting Japan at the moment and have been celebrated for their extravagant shopping habits.

The Japan Times this week published a story about the warm personal links between people who take part in a Chinese language exchange in Tokyo every Sunday afternoon.

The paper also spoke to Duan Yuezhong, a Chinese person who has lived in Japan a long time: “Most of the two countries’ people usually pick up information about each other from the media, which leads to distrust because it does not reflect the reality,” he said.