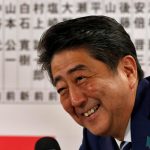 Japan makes a good conservative role model for other countries, according to a political journalist reacting to the general election.

Through a coalition of his party and supporters, Shinzo Abe has the support of around 80% of parliamentarians.

Stephen Bush wrote in the New Statesman’s blog that “Japan is in many ways offers the ideal target for meeting Conservative aspirations”. He notes the resounding success of Mr Abe’s right-wing Liberal Democratic Party, bolstered by the prime minister’s tough talk on defence, his emphasis on economic stability and his low immigration approach. Stephen Bush also says that Japan is “politically free of the destabilising movements that threaten the right in the UK and elsewhere.”

Japanese voters’ inclination towards stability helps explain why the LDP nearly always wins elections. However, there was an attempt to destabilise the political status quo recently, when the Tokyo governor Yuriko Koike launched a new party. The challenge fizzled out when she decided not to run for parliament herself.

Analysing the election result on the BBC, Professor Seijiro Takeshita from the University of Shizuoka said opposition parties lacked credibility and were “full of short-term populism”. He also said that politicians in Japan balk at saying “harsh things that voters don’t want to hear”, such as raising tax to tackle the national debt.

Other issues in the media are Japan’s relations with North Korea, Mr Abe’s efforts to reform the constitution and the state of the Japanese economy. Mr Abe has said that he will “firmly deal with North Korea using strong diplomacy”. The BBC’s Tokyo Correspondent Rupert Wingfield-Hayes said that “Mr Abe’s approach so far is to talk tough, request more missile defence for Japan and to stick close to President Trump.” But he said that Japan does not have much leverage. “It has no relations with North Korea, it has no trade and it has a poor relationship with China, so it’s hard to see what other options are available,” he said.

The Financial Times suggests that Mr Abe’s remaining years in office will focus on amending the constitution’s so-called peace clause, in which Japan renounces the threat or use of force in settling international disputes. Mr Abe’s election success has built him enough support in parliament to propose a re-write of the constitution.
Abenomics

The Prime Minister will also want to continue his programme of Abenomics. There has been some measurable success, with Japan’s GDP now growing at its best rate for a decade. The unemployment rate has also fallen but inflation is stuck at zero and there remains the unresolved issue of rising national debt. Professor Takashita believes the third arrow of economics, one targetted at structural reform, “is still floating through the air”.

The Nikkei Asian Review is harsher: it believes the third arrow is completely off course and it gives a “D” grade to the structural reform aspect of Abenomics. “There has been progress in improving the business environment including lowering corporate tax rates, promoting corporate governance and enhancing overseas economic partnerships. But efforts to boost labour productivity, leverage foreign workers and deregulation the medical, nursing care and other sectors have borne little fruit,” says the Nikkei.