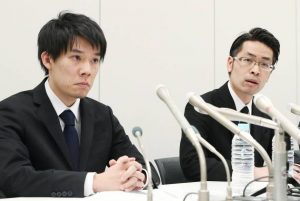 The Japanese press are full of headlines about a massive and silent bank robbery in Tokyo.

Asahi newspaper reports that around 58 billion yen (approx. $533 million) was taken by thieves from a vault in Shibuya, Tokyo. The money was not in cash but in the form of a cryptocurrency called NEM.

The cryptocurrency tokens were being traded through an agency called Coincheck. Its shocked bosses appeared before the cameras at a late night press conference at which they explained that millions of NEM tokens were removed from digital wallets and “sent illicitly outside the company’s system.” In other words, they were pinched.

All of this will add to the widespread view that trading in cryptocurrencies is sleazy, dangerous and out of control. It’s not the first big robbery in Japan. In 2014, millions of Bitcoins were taken from an exchange based in Tokyo called Mt. Gox, which soon went bust.

Since then, the overall value of digital tokens being exchanged around the world has increased significantly, with many investors hoping to make a quick profit from their deals. In Japan, this high risk aspect of the trading seems to be the allure. It’s not seen as an investment but a rather silly form of gambling, rather like pachinko.

There is even an all-female cryptocurrency-themed band called Kasotsuka Shojo, which literally translates as Virtual Currency Girls. Each member of the band represents a different cryptocurrency, from Bitcoin to Ethereum to Litecoin.

“We want to promote the idea through entertainment that virtual currencies are not just a tool for speculation but are a wonderful technology that will shape the future,” Rara Naruse, an 18-year-old singer with the group is quoted as saying.

This rather implausible theory is supported by Kasotsuka Shojo’s first single, which is called The Moon, and Virtual Currencies and Me. The song includes a few timely lines advising on online security.

Is Asia to blame?

The BBC’s Asia Business Reporter Karishma Vaswani recently asked if Asia is driving the Bitcoin craze. She revealed that a one point Chinese investors made up at least 80% of Bitcoin ownership.

But China became worried about the outflow of funds into the market, so it effectively banned cryptocurrencies by outlawing initial coin offerings, or ICOs, which are basically public share offerings that are invested in via the use of digital currencies.

That left Japan has a haven for the trade, now celebrated in song.

But as news of a cyber robbery flashes through the media, it probably won’t be long the conservative financial authorities in Japan try to halt a trade which is losing all financial credibility.