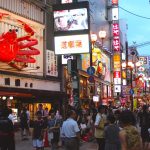 “There’s a good chance that Japan will soon be exiting its long dark era of deflation.”

That was the optimistic view expressed by Peter Berezin, who runs global investment strategy on behalf of BCA Research when he spoke to Market Watch this week. “This will be a huge surprise to investors,” he added.

It would also be a surprise to most media commentators who tend to define Japan’s economy as “ailing” or “moribund”. From their point of view, deflation is a symptom of national malaise.

Prime Minister Shinzo Abe and the Bank of Japan have a target of two percent inflation, which seems a long way off. The latest inflation numbers will be announced on Friday but the consensus among economists is that the rate will be less than zero, in other words in deflation territory, despite an experiment with ultralow rates.

Broken promises regarding the inflation target have eroded trust in the central bank and have affected the credibility of Mr Abe. Mr Berezin’s optimistic opinion is that the situation could change soon. His view is based on one of the great strengths of Japan’s economy: its very low unemployment rate, which stood at 3.1% in December.

Mr Berezin believes that this low unemployment and a very high ratio of job openings to applicants will encourage employers to offer pay rises to new recruits and to existing staff. Should this happen, the theory is that the newly enriched employees will go out shopping and this will stimulate the economy and push up prices.

Not everyone agrees with such optimism. Bank of Japan board member Takahide Kiuichi argues that the bank’s 2% inflation target is “unfeasible” due to demographic trends, such as a decline in the population of people of working age.

“Price conditions will remain consistent with the economy’s growth potential,” he says.

Deflation is only part of the picture. A country’s economic success is often measured by overall GDP growth. Japan’s growth has averaged less than one percent annually since the 1990s.

A writer called Kevin Drum has written an intriguing article on Mother Jones which claims that the overall GDP numbers tell a limited story. Mr Drum says: “The key metric to judge whether an economy is in good shape is GDP per working-age adult, since that tells you how productive your workers are.”

He claims that GDP per worker in Japan has risen to a higher rate than the United States. This surprising claim counters the view that Japanese workers are not particularly productive. Hard working, productive staff and a low unemployment rate would justify a rise in wages.

Potentially, women could benefit more than men. Mr Abe’s policy of “womenomics” to encourage more women into the workforce seems to be working. The female labour force participation rate was 50.4% in December 2016, compared to 47.8% when Mr Abe took office in December 2012.

Both women and men would be pleased to take a pay rise, especially if it indicates a greater optimism about Japan’s economic future.