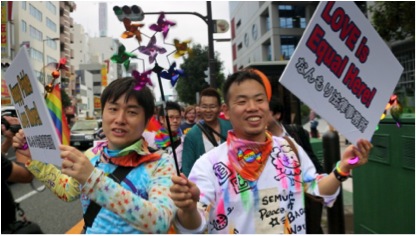 There is a lively debate in Japan about whether two people of the same sex can get married.

Some gay and lesbian couples have held wedding ceremonies and a few local and governments have offered legal recognition to same-sex partnerships.

However, that is not the same thing as a legally recognised marriage.

Earlier this month, a group of campaigners tried to use the courts to change the situation.

Five lesbian and eight gay couples filed lawsuits across the country seeking damages of 1m yen (£7,000/ US$9,000) for each person for being denied the same legal rights as heterosexual couples, according to the AFP Agency.

“Why don’t we even have the simple choice of whether or not to get married?” asks Yoko Ogawa, who has been in a partnership with a woman for 25 years.

The article explains that Japan’s constitution stipulates that “marriage shall be only with the mutual consent of both sexes” and the government says this means same-sex marriage is “not foreseen” in the constitution or civil law.

Of Love and Law

This week, I raised this point with film director Hikaru Toda, who has made a fascinating documentary called Of Love and Law.

The film focuses on two openly gay lawyers, Kazu and Fumi, who are campaigning for legal recognition for their own marriage and those of their clients.

I asked Toda San if Kazu and Fumi believe that constitutional change is required before gay marriage is legalised. She replied that this is not their opinion and said that many constitutional experts agree with them.

Their idea is that the constitution can be interpreted in a new way, rather than being rewritten.

Japan has not revised its constitution since it was written by the American occupiers at the end of the Second World War.

To change it is an arduous task, requiring massive political effort and a public referendum. The Prime Minister Shinzo Abe has committed himself to go down this route in order to revise a section of the constitution which relates to security and defence.

In doing so, Mr Abe hopes to change Japan’s Self Defence Force into an army with the capacity to fight internationally. It is a divisive issue and a constant source of debate within the Japanese media.

As the film Of Love and Law illustrates, it even brings people out onto the streets in protest. So clearly constitutional change involves a lot of argument and protest, both of which make the Japanese feel uncomfortable.

Social change in Japan usually occurs when there’s a general agreement about the best way forward.

It therefore makes sense that the lawyers who want to change the status of marriage are seeking to avoid unnecessary confrontation.

And given that social attitudes towards homosexuality are rapidly changing – particularly among young people in Japan – I expect that they’ll find widespread support for their idea within a generation.