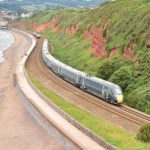 It will soon be possible to catch a Japanese bullet train along one of the most scenic and stormy coastal rail routes in England.

Hitachi is building special waterproof trains which will be able to run along a track beside the sea in Devon in Southwest England, where gale-force winds often blow seawater onto the line.

The the new Class 802 Intercity Express Trains, which will run from London Paddington to Exeter, Plymouth and Penzance from next year, have been designed to withstand the storms.

Hitachi a Japanese company with deep links to Britain and its presence is felt in many regions.

It is a major player in the UK’s railway industry. Hitachi trains, known as Javelins, carry passengers from London St Pancras station to the Southeast coast of England at great speed.

Now Hitachi Rail is bidding for a £2.75 billion contract to build trains for the planned HS2 high-speed railway which will connect London, Birmingham, Manchester and Leeds. The government says HS2 will boost the economy but its cost has been challenged by opponents.

If Hitachi wins the HS2 deal, it plans to build the trains at its factory in County Durham in the Northeast of England. That could create hundreds of new jobs in a region which has been affected by industrial decline.

Julia Potts from Hitachi Rail says: “Train building is a craft. There is a lot of manual work which cannot be done by robot or machine. We can produce great quality trains here but we depend on skilled people.”

British politicians are delighted that Hitachi intends to keep producing jobs in the UK, especially in regions where unemployment is a problem. Another example of the company’s commitment to Britain is a new laboratory for Hitachi High Technologies in Daresbury near Liverpool, where it will develop sophisticated electron microscopes. Elsewhere, Hitachi Construction Machinery has a successful factory in Hebburn in Northeast England which makes excavators and dump trucks.

Naturally, there are concerns over Brexit. Japanese companies which invested in Britain, including Hitachi, expected to use the UK as a gateway to Europe’s single market and will be impacted by Britain’s exit from the EU. Prime Minister Theresa May spoke to Hitachi’s chairman Hiroaki Nakanishi about the issue during her visit to Tokyo earlier this month. She said Britain would seek a free trade agreement with Japan following Brexit, although the time scale is unclear.

Hitachi’s success in Brexit depends not so much on the Brexit as its future role in major infrastructure projects, such as HS2 rail. It also plans to build nuclear power plants in Wales and is expecting substantial financial support from the Japanese government.

Hitachi and other Japanese companies which build nuclear plants are focussed on winning foreign work following the Fukushima disaster, which has led to a suspension of new reactors within Japan. This puts Japanese companies in competition with Chinese rivals. However Britain has signed deals with both Asian countries. Hitachi’s Welsh project will be matched by a huge Chinese nuclear power plant at Hinkley Point in England, with both plants expected to come on line at some point in the next decade.