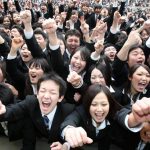 A record number of foreigners are working in Japan and many companies are actively recruiting globally for new staff.

This week I gained insights into the opportunities and challenges at a conference on employment, hosted at the Japanese department of SOAS, part of the University of London.

It was focussed on university graduates but also had relevance to people looking to move jobs in the later stages of their career.

Chikako Masuzaki, a consultant from Top Career, explained that the decline in the working age population in Japan is driving companies to hire globally.

She expects the working population in Japan to decrease by around ten million people over the next ten years and said there has been a 40% fall in the number of 18-year-olds since the year 2000.

According to the Labour Ministry, the number of foreign workers in Japan surpassed one million for the first time last year.

Ms Masuzuki said: “There is a big difference between recruiting practices in Japan and the rest of the world. For example, interviews may ask “What is the hardest thing you have tried to accomplish?” – a question which can seem strange to foreigners but which is designed to assess people’s potential as problem solvers.”

She said: “I heard some horror stories about the application process in Japan but actually applying for this position was relatively straightforward.

“When I studied in Japan I did a lot of bowing and I tried to speak in polite Japanese (keigo). Now that I’m working in London, I’m not quite sure how much to bow and when to use honorific language. I don’t want to be overfamiliar but I don’t want to come across as too formal, either.”

“We have very diverse industries so we want a diverse group of people,” he said.

He added: “At Toshiba, we want people to come in and challenge the way we do things. Japanese companies must adapt in order to globalise.”

Mr Robinson said integrity, commitment and innovation are among the attributes he most values in candidates.

He also said that few roles outside Japan require people to use the Japanese language to a high standard, although the ability to communicate with colleagues in Japanese is “nice to have”.

Traian Ivanov leads the human capital group at Deloitte, which supplies staff to Japanese clients. “We place an emphasis on diversity and we seek curious, dedicated and smart people,” he said.

He claimed that fewer Japanese young people than before wish to work overseas, so this provides further opportunities for internationally-minded foreigners.

Mr Ivanov went on to say: “Ten years ago, around 500 out of the biggest companies in the world were Japanese. Now there’s only one global giant – Toyota. Traditionally strong companies such as Toshiba and Panasonic are in trouble and so they are seeking to revive their fortunes. A lot of companies are seeking to expand their overseas operations so they hire local people who understand the local market.”

Junko Hashimoto a senior manager at Access Appointments said: “Attitude and motivation are just as important for getting the right job as qualifications and experience.”

Harry Martin from another recruitment firm, Centre People, claimed that Japanese companies are more open to hiring foreigners and people who do not speak perfect Japanese, although an understanding of Japanese business culture is always appreciated.

Mr Martin said that the staff of Japanese organisations are expected to be loyal and long-serving. People who change jobs frequently are not attractive to recruiters. He also said: “If you approach your job search with rigid expectations you will limit yourself and may miss opportunities that you may not even have considered.”

The meeting at SOAS was organised in conjunction with the University of Sheffield, The National University of Singapore and Osaka University. Thank you to Sarah Parsons, Senior Teaching Fellow at SOAS and Managing Director of East West Interface for extending the invitation to Japan Story.