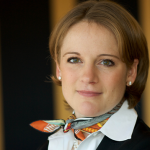 One of the most influential women in international finance has announced that Japan will be at the forefront of her investment strategy this year.
Sonja Laud, who is the head of equity investment at Fidelity International, says that Japan stands out as “a very attractive opportunity.”

She says the main attraction is Japan’s recent return to economic growth but that “lots of factors are coming together” including healthy profits at Japanese companies. Ms Laud oversees $16 billion in assets at Fidelity.

She told the BBC’s flagship radio news programme Today that Japanese companies are rich with cash at the moment as a result of Abenomics and their increased profitability, so therefore they should be able to drive the economy forward in 2018.

The Tokyo stock market has recently risen as corporate profits swell, led by export growth. This prompted a wave of optimism towards the end of last year as Japan enjoyed its longest growth streak this millennium. The credit agency Moody’s confirmed Japan’s A1 rating, its highest possible score, in December.

Yet there remain problems linked to deflation and low wage increases. Jane Foley, senior currency strategist at Rabobank, has described that situation as “a real conundrum.”

She says: “Japan was one of the big surprise stories when it came to growth last year. Yet inflation remains extremely low and this is despite the fact that there is such a shortage of labour.”

“Japan was one of the big surprise stories when it came to growth last year.” Jane Foley, Rabobank

By contrast in the United States, which also has a tight labour market, wages have been rising and this led to a surge of optimism which helped the US stock market reach record highs. The US central bank, the Federal Reserve, is therefore easing out of its money-printing programme known as QE.

Prime Minister Shinzo Abe and the Bank of Japan hope that wages will also rise in Japan because of the labour shortage and this will push inflation upwards. The Bank of Japan has an inflation target of two percent, although most economists say this is currently far off. As a result, the Bank of Japan is sticking with QE and negative interest rates.

Jane Foley of Rabobank told the BBC: “The Bank of Japan is so far from its inflation target that it’s going to be difficult for it to withdraw from the QE programme. Yet back in November, governor Haruhiko Kuroda said he was worried about the side effects of QE, one of which is that yields on interests rates are so low that banks won’t even lend money any more. That would be the exact opposite of what the Bank of Japan wants.”