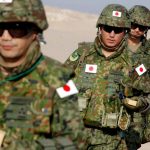 Japan is unable to defend itself, according a scathing article about its military published in the Washington Post this week.

The journalist John Pomfret claims that the Self Defence Force is weak, disorganised and under-funded. He suggests this causes dismay to Japan’s principal ally, the United States.

Pomfret bases his article on an interview with Grant Newsham a colonel in the US Marine Corps, who served as a liaison officer to Japan’s Ground Self Defense Force.

Newsham complains of Japan’s “pathological dependence” on the United States for its security.

“The Japanese like to say, ‘The Americans are the spear and we’re the shield,’” Newsham is quoted as saying. “Well, in battle, the spear gets bloodied and the shield doesn’t. It’s the Americans who are expected to do the dying on Japan’s behalf.”

The perils facing US personnel based in Japan were underlined when a US Navy aircraft crashed in Japan this week. Fatal accidents involving the US military increase the pressure on the Japanese government to justify its alliance.

Japan’s defence capability is also high on the agenda because of the threat from North Korea and because Prime Minister Shinzo Abe wants to reform the constitution so that Japanese forces can fight abroad.

That is a politically divisive issue in Japan. But the Washington Post suggests the Self Defence Forces are ill-prepared for combat and that the air force, navy and ground troops can barely work together. It says “they do not even possess radios that can talk to each other.”

Colonel Newsham says the problems were apparent when the Americans helped clear up after the 2011 earthquake and could not communicate with the Japanese.

The Washington Post article fits in with a wider agenda of the Trump administration, namely to reduce the dependence of US allies on its expensive military protection.

That was also a theme in an interview for NHK television this week by Mr Trump’s former advisor Steve Bannon. He claims to still speak to the president “two or three times a week.”

“Prime Minister Abe and others have talked (about) Japan’s looking at redoing its Constitution, looking at getting just away from a Self-Defense Force, maybe back to become a military power again,” Bannon said. “And I think that what President Trump is saying, given its role in the Pacific, given its role as how central it is to the strategy, that it will acquire more of a military force over time.”

He also suggested a communication gap between Japan and the US, saying the two allies are “just beginning” to ensure the two militaries can work together “and that the United States is there to help its ally Japan rearm and rearm appropriately.”