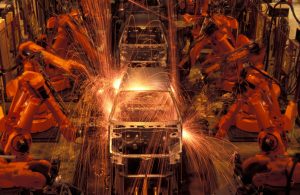 Many business leaders are stunned by the outcome of the referendum in which the people of the United Kingdom voted to leave the European Union. There could be a big impact on the Japanese automotive companies which have factories in the UK such as Toyota, Honda and Nissan.

They may move some or all of their operations to other parts of Europe. The Financial Times said that there is a 75 % chance that Toyota and Honda will cease manufacturing in the UK if the EU imposes an import levy on cars manufactured in Britain and sold in Europe. The Nikkei says that Toyota predicts that this tariff will be 10 %, affecting both profits and sales. Toyota, which has a major factory in Derbyshire, is unlikely to use the UK as the location to build its new hybrid vehicles, according to the Times.

The Times also reported that Nissan, which employs 7,000 people in the North East of England, is under pressure form its partner Renault to move some operations to France. It says this could affect the development of the Nissan Leaf battery-driven car.

The Wall Street Journal said that Nomura Securities has downgraded its profit estimate for the seven major Japanese auto makers following the Brexit. Yet Nomura analyst Masataka Kunugimoto does not expect a bitter trade war between Britain and Europe: “We think the risk is relatively small given the high volume of automobile trading between the UK and the EU and the negative impact for both sides from higher tariffs.”

Since the Brexit, the pound has fallen and the yen has risen. The yen is up around 30 percent against the pound compared to a year ago. The fall in sterling makes exports from the UK cheaper, which is a potential benefit for UK-based manufacturers. However, many investors moved money from the pound into so-called safe haven currencies, including Japanese Yen. A strong yen is seen as a problem for Japanese exporters, including automotive firms.

“Sterling’s depreciation will make exports more competitive so will boost sales and hence production in the UK,” Professor David Bailey of Aston University, told the Daily Telegraph. “But it will also increase the cost of importing components and about 60% of the parts going into the UK-assembled cars are imported.”

Professor Bailey also warned about the impact on the car industry of an end to the free movement of labour between the EU and Britain – one of the demands of the leave campaigners in the referendum. He said: “The car industry in the UK has 30,000 vacancies and needs to be able to hire skilled workers from Europe.”