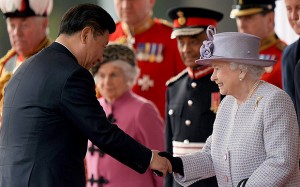 The British prime minister David Cameron said the relationship between Britain and China is entering a “golden era”. Many business deals were signed during a trip to London by the Chinese president. Should Japan be worried?

There was a warm welcome for President Xi by the Queen, Mr Cameron and Britain’s politicians and business leaders. One Chinese newspaper called it a match made in heaven because the UK wants to attract overseas investment and Chinese investors are seeking quality destinations for their funds.

The UK would like Chinese money for big transport and energy projects, such as high speed rail lines and nuclear power plants. Those are fields in which the Chinese and the Japanese compete. For example, Chinese investors have agreed to take a stake in a new nuclear plant. Japanese companies such as Hitachi, Mitsubishi and Toshiba are also keen to help build nuclear power plants in Europe. However, the Fukushima disaster has damaged Japan’s safety reputation.

Another concern for Japan will be the diplomatic impact of President Xi’s visit. China and Japan are sensitive when their rival is courted by other countries. Yet even as the red carpet was being rolled out for President Xi at Buckingham Palace, the British Parliamentary Group was holding a reception for the Japanese Chamber of Commerce and Industry in a building beside Big Ben.

President Xi mentioned Japan briefly during his speech in the City of London. He said this year marks the 70th anniversary of the victory of the Chinese People’s War of Resistance against “Japanese Aggression and the World Anti-Fascist War”.

He praised George Hogg, a British journalist who he says exposed the “atrocities committed by Japanese aggressors” in his reports.

Mr Xi said: “The enduring friendship forged between the Chinese and British people in the flames of war is an invaluable asset of China-UK relationship.”

Such rhetoric is so often used by the Chinese it was barely noticed by the British media.

However, there were some people who expressed disquiet about the British establishment’s enthusiasm for China. One critic used the BBC’s flagship radio programme Today to voice his concerns. China expert James McGregor warned that Britain would now be seen as being “on a leash” by the Chinese leadership. Mr McGregor, who is the chairman of consultancy group APCO Worldwide’s Chinese operations, said: “This is incredible what’s going on right now, with the British Government saying ‘we want to be your best friend, we want to be your best friend, we’ll do anything for it’.

“Well, if you act like a panting puppy, the object of your attention is going to think they have got you on a leash. China does not respect people that suck up to him. I think England is going to rue the day they did this.”

The Chinese state newspaper China Daily said the business deals stemming from the visit will only be the low-hanging fruits. “This visit is more about diplomatic realism. It is too early to talk about a UK-China ‘love story’.”