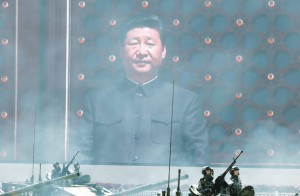 An enormous military parade marking the anniversary of Japan’s defeat took place in China. Japan’s defence ministry has requested its largest ever budget. And the Yakuza crime gang Yamaguchi-gumi has broken up.

China marked the 70th anniversary of Japan’s surrender in WWII with a vast parade of soldiers and weapons in Beijing, including intercontinental ballistic missiles and advanced bombers. The event was attended by both Vladimir Putin of Russia and the South Korean president Park Geun-hye. In a speech, the Chinese President Xi Jinping said China does not seek regional hegemony or expansion and that it will never inflict its past suffering on any other nation. He insisted that China was “loyally committed to the sacred duty of safeguarding world peace.” He also made the surprise announcement that Beijing would cut its two million-strong military personnel by 300,000 and described this as a gesture of peace.

Japan’s defence ministry ignored the announcement and requested a budget of five trillion yen (£27bn) next year, citing concern over China’s construction of artificial bases in the South China Sea and its claims to the disputed Senkaku/Diaoyu island chain in the East China Sea. If passed by the Diet, this will be Japan’s biggest ever defence budget and would match prime minister Shinzo Abe’s plan to expand the scope of his country’s military.

Japan’s image was not helped by media coverage of the Yakuza, an organised crime group. The BBC website said the Yakuza mainly make money from gambling, prostitution and violence. It claimed that the name Yakuza is derived from the numbers eight, nine and three; a losing hand in a Japanese card game. This week the Kobe-based Yamaguchi-gumi Yakuza gang said it has broken up. Apparently, the Japanese police force is bracing itself for gang warfare as small groups of Yakuza attack others groups in battles for territory.

The Yakuza often make profit by selling drinks at extortionate prices to the customers of hostess bars. Yet those drinks appear cheap in comparison to the Japanese whisky sold this week. Bonhams auction house said a single buyer from Southeast Asia spent $118,540 on a bottle of 1960 Karuizawa, a world record. The same buyer also picked up a separate 54-bottle collection of Japanese whisky for another $489,968.

Because the whisky was sold in Hong Kong and not in Japan, the astonishing prices did nothing for Japanese inflation, which has now slipped back to zero. Still, that means a refreshing cup of green tea costs no more than it did a year ago, offering a cheap opportunity to reflect calmly on Japan’s more sober and peaceful qualities.