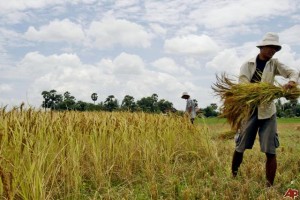 Japan’s prime minister Shinzo Abe hailed a trade deal with the US and other countries as a major political victory. The deal has been welcomed by Japanese exporters like Toyota but Japanese farmers are worried about its implications.

The Tran-Pacific Partnership (TPP) aims to make commerce easier between twelve countries, including the US and Japan. It removes many restrictions on imports and exports and should sweep away tariffs and bureaucracy. Because the major players, Japan and the US, enjoy such a large share of the global economy, the media’s attention has been on them rather than the other signatories, such as Peru.

For Japanese exporters seeking greater access to the US market, it presents an opportunity to compete more vigorously with their international rivals. Car makers such as Honda and Toyota expect to benefit. Therefore TPP has the backing of the powerful Japanese business group, the Keidanren.

For Japan’s farmers, TPP is a potential problem. They are worried that Japan will now allow imports of large quantities of rice, which is cheaper than the home-grown crop. Up to now, Japanese farmers have received subsidies from the government and there have been heavy tariffs on some types of imported rice. The leading Japanese newspaper the Nikkei asserts that the Japanese government has managed to exclude five agricultural products from the TPP deal; rice, wheat barley, dairy products, sugar cane and beet and beef (except organ meat).

Still, many Japanese people are concerned about the longer term implications of opening Japan up to this rigorous international competition.  Will it mean that rice farmers lose their livelihood? Or can they adapt to cope with the competition?

However, for the international journalists, the Japanese farmers are not the main story about TPP. The reporters are more interested in a disagreement between Hilary Clinton and President Obama.

Mr Obama – like Mr Abe – hailed the deal as a success. He told business leaders: “I wanted to get the best possible deal for American workers and American businesses, and that is what we have achieved.”

However Mrs Clinton said she cannot support the agreement. The Republican party in the US is not supportive either, which could mean it is not ratified in Congress. The Financial Times says Mr Obama hopes to get TPP passed by Congress before he leaves office in January 2017 but the political process is complicated.

China – which is not part of the TPP deal – reacted cautiously. China’s Ministry of Commerce called TPP “one of the key free trade agreements for the Asia-Pacific region”, according to the Xinhua state news agency website.  “China hopes the TPP pact and other free trade arrangements in the region can boost each other and contribute to the Asia-Pacific’s trade, investment and economic growth,” it said.