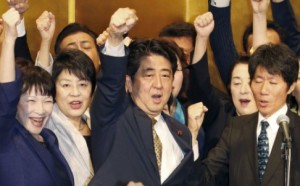 There was a further blow to the reputation of Toshiba. The Tokyo stock market soared. And Shinzo Abe is set to become Japan’s longest serving prime minister since the 1970s.

Toshiba revealed in April it has exaggerated its profits, leading to the resignation of its chief executive Hisao Tanaka. This week Toshiba admitted the scale of the problem: it overstated profits by nearly two billion dollars over the past seven years. The media made comparisons to the recent accounting scandal at Olympus.

Seijiro Takeshita of Shizuoka University told BBC radio that companies such as Toshiba should not hold onto “the old methodology of business conduct without trying to change, or recognising that the world has changed.” Yuuichiro Nakajima of Crimson Phoenix said: “Toshiba will change – they will have to. They will probably sell non-core businesses. This will probably scare other, similarly unwieldy conglomerates to do the same.”

Laws to enforce reliable accounting and honest financial reporting are included in Abenomics and form part of the so-called “third arrow”, which is actually many different arrows. The Financial Times printed an excellent guide to which arrows are on target.

So is Abenomics working? There are encouraging signs. Economic figures were better than expected, so it seems Japan is not about to re-enter recession. The Nikkei recovered all the losses it incurred last month during a panic over China. And there was yet another  takeover, when Mitsui Sumitomo bought the London-based insurer Amlin for three and a half billion pounds. Peter Gray of Cavendish Financial told City AM: “Cash-rich Japanese companies have clearly opted for mergers and acquisitions as a response to a slow domestic market.”

The slow domestic market is the most serious problem for Abenomics. Fund Manager Hideo Shiozumi wants Japan to break the cycle of recession and believes Japan must target real GDP growth of two percent. Mr Abe said: “We will change Japan into a country that is able to keep growing. Placing the economy as my highest priority, I will move forward steadily, step by step, on the roadmap for achieving this goal.”

Mr Abe’s re-election uncontested as leader of the LDP gives him time to work towards that goal. He is now set to become Japan’s longest serving prime minister in more than four decades.