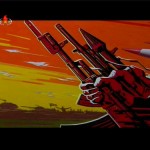 What can Japan do in response to North Korea’s claim it has tested a hydrogen bomb? Prime Minister Shinzo Abe has promised firm action but his options are limited.

North Korea exploded a weapon early in the morning of Wednesday 6th January 2016 and claimed on the television news at 10am that it was a hydrogen bomb.

A note from the leader Kim Jong Un was used as propaganda.

He wrote: “Let’s start 2016 with the thrilling sound of a hydrogen bomb blast”.

The media turned to nuclear experts in South Korea, the US and Japan for advice. The general view is that it was probably a nuclear weapon but not a hydrogen bomb.

“North Korea’s nuclear test is a serious threat to our nation’s security and absolutely cannot be tolerated. We strongly denounce it,” prime minister Abe told the parliament in Tokyo. Japan sent surveillance planes to the region.

Mr Abe said: “Japan will take a firm response, including at the UN Security Council, in cooperation with the United States, South Korea, China and Russia.”

It is a path the countries have been down many times before but it does not seem to concern the North Koreans.

President Barack Obama talked by telephone with Mr Abe after the explosion.

Mr Obama reaffirmed the US commitment to Japan’s security and the two leaders “agreed to work together to forge a united and strong international response to North Korea’s latest reckless behaviour,” the White House said in a statement.

Christopher Hill who led the US delegation in North Korean nuclear talks told the BBC that even if it was not a hydrogen bomb this time, North Korea clearly has the intention to develop hydrogen weapons.

He said the only country which could now influence North Korea’s behaviour is China.

“(North Korea) is already one of the most sanctioned countries in the world,” Mr Hill said.

China immediately condemned the bomb test and said it wants an end to all nuclear weapons on the Korean peninsula.

China’s other concern is a collapse of North Korea, which could mean a flood of refugees. A reunification of the Koreas would create an enlarged country allied to the United States. Such a situation would be a relief for Japan but a concern to China.

In an excellent piece for the Daily Mail, the former British Ambassador to North Korea John Everard said China does not want North Korean aggression to disturb the delicate political and military balance in East Asia.

He wrote: “It’s notable that relations between South Korea and Japan, both close U.S. allies, have grown notably warmer in recent months, which will not have pleased China, which hopes for a loosening, not a tightening, of ties between the Asian democracies.”

The Times described Kim Jong Un as a “fat bully who is a great deal more scared of us than we are of him”.

In his analysis, the Times’ Tokyo correspondent Richard Parry suggests it would be a grave mistake to dismiss Kim as mad. He said Kim’s actions reflect his desire to protect his regime despite the enormous financial burden of the nuclear weapons programme.

Yet what use is a diplomatic response to a country which rejects negotiations?

North Korean television said in the wake of the explosion: “The way of peace does not lie across a dirty conference table.”