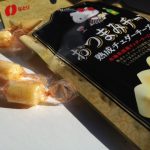 Until recently, cheese was a rare treat in Japan. There are not very many cows in the country, so any type of dairy product, including cheese, feels rather foreign.

However, since World War Two, Japanese people have been developing a taste for American food, so they have started to eat cheese on the top of burgers and on pizza.

Nowadays, small packets of mild, smoked cheese are sold in most convenience stores, as snacks to accompany beer.

However, there are connoisseurs in Japan who enjoy imported cheese, especially the strong-tasting varieties from France.

I’ve seen some lovely cheese counters in supermarket delicatessens in Tokyo and Osaka but I have now come to realise that the tax on the European cheese sold in those shops is high.

This cheese tax, as high as forty percent, has provided journalists with a tangible element to explain an otherwise rather abstract story about a free trade deal between Japan and the European Union, which is due to be signed soon.

The cheese tariff is designed to protect Japanese farmers who sell their dairy products in the domestic market. Many have farms on the Northern island of Hokkaido, which supplies much of Japan’s butter and milk. Most butter bears a map of Hokkaido on its packaging.

Kyodo news quoted a farmer from Hokkaido who said that if imports of cheese, pork, wine and sweets increase from the European Union, the Japanese market will be “taken over.”

Traditionally, the ruling LDP party has close links with farmers and supports their causes but it does not want a dispute over dairy products to block a free trade deal which has many potential benefits for Japan.

If Japan drops its tariffs on European food imports, it expects Europe to phase out tariffs on cars and auto parts.

The European Union’s Trade Commissioner Cecilia Malmstrom has said she is “quite confident” that a broad agreement on free trade can be announced at a summit on July 6th with Japanese Prime Minister Shinzo Abe.

Britain was a supporter of a free trade agreement between the European Union Japan but its influence ceased following the UK’s vote to leave the EU in 2016.

Japan had sought a trade agreement with the United States known as the Trans-Pacific Partnership but that fell apart when Donald Trump steered America towards protectionism.