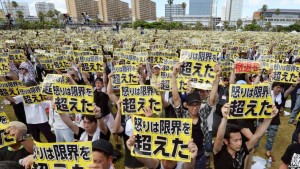 Tens of thousands of people have taken part in angry protests against the American military presence in Japan.

Meanwhile, a Russian delegation has been welcomed to Tokyo to try to break the deadlock which has blocked a formal peace treaty between Russia and Japan since the end of World War II.

It was soon after Japan’s defeat in the War that America began to use Japan as a military base.

Nearly 30,000 of the 47,000 US troops stationed in Japan are on the small tropical island Okinawa. Even though they contribute to the economy, their presence there has long been resented by locals.

The anger intensified after a former US Marine was arrested in connection with the death of a local woman in May.

The Japanese government knows the Okinawa base is unpopular but feels it has little choice to accept it. In return for its big military presence in Japan, the United States promises to protect its ally against aggression.

Recently the defence links with America were strengthened when Prime Minister Shinzo Abe brought in new security laws which commit Japanese forces to defending its military allies, including the United States.

These laws, which seem to stretch the concept of pacifism enshrined in Japan’s constitution, are unpopular; studies show that more than half of Japan’s population is opposed to them.

However, the need for defence was reinforced by more missile launches by North Korea this week.

Official media reported North Korea’s leader Kim Jong Un as saying “We have the sure capability to attack in an overall and practical way the Americans in the Pacific operation theatre.”

In the face of such belligerence, Japan wishes to keep the peace with neighbouring countries where it can.

It complicates things that South Korea, Russia and China have territorial disputes with Japan over certain islands and territory.

But with North Korea increasing the pressure and anti-American feelings running high, Japanese diplomats are working hard to prevent its neighbours from becoming enemies.

One Reply to “Mass protests against US presence in Japan”