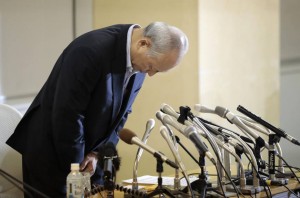 The resignation of one of Japan’s most famous politicians has shown the power of a weekly gossip magazine called Shukan Bunshun.

The governor of Tokyo, Yoichi Masuzoe, quit after an expenses scandal was revealed in the magazine, which specialises in stories about the shady side of powerful people.

The magazine specialises in stories about well-known figures; the more scandalous the better. Its reporters deny it pays money for information.

In a country where most people are very respectful towards privacy and hierarchy, the reporters from the weekly magazine break the rules to get the stories.

Although most people say they do not believe all the articles in magazines like Shukan Bunshun, journalists from other media repeated its allegations about Mr Masuzoe in the newspapers and on TV.

The allegations against Mr Masuzoe were published in the magazine in April. They included claims that he used his political expenses to pay for private stays in hotels, meals and works of art.

Mr Masuzoe said that there were some mistakes in the way the money was accounted for but he insisted that all the spending was reasonable.

Nevertheless, a media storm built up and just before he quit, opinion polls showed a disapproval rating of 97 per cent for the governor.

This is the third time this year that a scandal revealed by Shukan Bunshun has led to a resignation.

Firstly, the Economy Minister Akira Amari stepped down after allegations of corruption.

A few weeks later, the magazine reported that a member of the Diet (Japan’s parliament) called Kensuke Miyazaki was having an extramarital affair days before his wife gave birth. That ruined his image as a caring family man.

Mr Amari and Mr Miyazaki were little known outside Japan but Mr Masuzoe was a high profile figure so his resignation was big news internationally.

Some of the articles were quite judgemental. The Daily Telegraph noted “a perception of arrogance and entitlement on the part of the governor.”

That is quite different to the impression I received when I went to a meeting with Mr Masuzoe in London last year; I was impressed by his excellent English and his sense of fun.

However, the governor’s foreign trips – like the one to London – were expensive, as he flew first class and took his staff on business class.

Mr Masuzoe’s energy and fun appealed to voters in Tokyo. People also hoped that he would be reliable and honest – especially because the previous governor of Tokyo stepped down because of a scandal in 2013. Mr Masuzoe had been a vocal critic of “money politics” on national TV and other media. He had cultivated a clean image as a university professor

Political resignations do not help the image of Japan. Foreign readers get the impression that widespread corruption is a characteristic of Japanese politics.

But it is worth remembering that everyone’s opinions on Mr Masuzoe were based on an article in the Shukan Bunshun – a magazine which regularly smashes through the politeness and respect which lie on the surface of Japanese society.