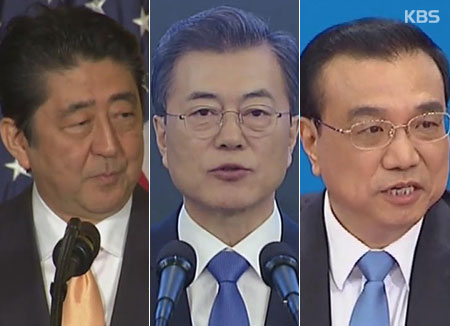 Prime Minister Shinzo Abe showed his skill as a diplomat by giving a cake to the South Korean President Moon Jae-in when he visited Tokyo this week.

The cake was to celebrate the first anniversary since Mr Moon took office last year.

The Chinese premier Li Keqiang also attended the trilateral summit. It was first time leaders of the three countries have met as a group since 2015.

He invited Mr Abe to visit China later this year and Mr Abe willingly accepted the offer – although he must still overcome some serious political problems at home if he’s to stay in office.

The Diplomat points out that the summit came as Mr Abe remains besieged domestically by scandals, so hosting the other Asian leaders was an opportunity for him to present himself as a leader with regional influence and that could boost his public approval ratings.

The issue of North Korea dominated media coverage of the trilateral summit.

China, Japan and South Korea all agreed to work together to get North Korea to give up its nuclear weapons.

Mr Abe reiterated Japan’s position that it would normalize ties with North Korea only if the latter took concrete steps toward abandoning its nuclear and missile programs and also resolved the issue of Japanese abducted by North Korean agents.

For Mr Abe, words alone are not enough: he wants proof the whole weapons programme is being shut down. Japan has therefore offered to pay 300 million yen ($2.75 million) to cover the cost of an inspection of North Korean nuclear facilities by the International Atomic Energy Agency (IAEA).

Korea’s KBS says the trilateral summit in Tokyo was a good opportunity for Mr Moon to gather support for the Panmunjom declaration. It says close cooperation between the three Asian countries is indispensable to achieve the common goals of peace and denuclearisation.

China has applied pressure on North Korea through sanctions and clearly wishes to be closely involved in the next stage of the process. Kim Jong-Un made two surprise trips to China, where he met President Xi.

This is the point at which the United States takes centre stage. Donald Trump is preparing for talks with Mr Kim, probably in Singapore in June. Before then, Mr Moon will hold a meeting with Mr Trump in Washington on May 22nd at which the two leaders plan to have close consultations on North Korea issues.