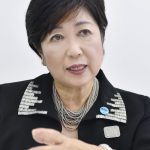 A former TV presenter who was heralded as Japan’s first potential female prime minister has announced she is not yet ready to do battle for the top job.

However, she has decided that she is not yet prepared to quit her powerful position as governor of Tokyo in order to stand for the national parliament. She cannot become the country’s prime minister unless she first becomes an MP. The general election will take place on October 22nd.

Ms Koike recently established a new party Kibo no To, or Party of Hope. Its is designed to upset Mr Abe and his ruling coalition, which was struggling to enthuse voters after a series of corruption scandals.

Nevertheless, Mr Abe calculated that a victory for his Liberal Democratic Party (LDP) is all but assured in the forthcoming election – partly because it nearly always wins and also because the main opposition party – the Democratic Party (DP) – appeared too weak to put up a fight.

Mr Abe appeared to be proved right when the DP imploded after Ms Koike mounted a challenge. It announced it would field no candidates for the election. Some of its members then defected to Ms Koike’s Party of Hope.

The Democratic Party’s collapse leaves voters with a narrower range of political choices. Normally, the Democratic Party offers a more left-wing set of policies than the LDP and is regarded by Japan’s neighbours, such as South Korea and China, as less nationalistic and more cooperative than the LDP.

The Party of Hope’s policies are significantly further to the right than the Democratic Party and Ms Koike’s own political roots lie in the LDP. She says she is committed to “reform conservatism” – including a reform of the clause in Japan’s constitution which commits the country to a form of pacifism. That irks some politicians on the left of the Democratic Party, who claim that constitutional reform runs against public opinion and will create further problems with China.

Stephen R. Nagy – a politics professor at the International Christian University in Tokyo – used an opinion piece in the Japan Times to suggest that many voters support Mr Abe’s tough position on defence and security because of North Korea’s recent belligerence as well as Chinese behavior in the East China Sea and South China Sea.

Mr Abe claimed that he called the election to deal with a “national crisis”. Yet although the escalating threat from North Korea could be regarded as a “crisis,” domestically, the situation is calm. Its economy is growing at the fastest rate for two years. Unemployment is very low and by many measures, it remains one of the richest and most peaceful countries in Asia.

In response to Ms Koike’s populism and in particular her appeal to female voters, Mr Abe has responded with what he hopes will be popular policies of his own. These include a push to provide free childcare for three-to-five-year-olds, paid for partly by a rise in consumption tax in 2019. Although this might win him favour among some younger voters and women, it creates additional expenditure which will hamper him from achieving his stated goal of achieving a budget surplus by 2020.

The decision to raise spending was described as “extremely regrettable” by Yoshimitsu Kobayashi, the chairman of the Japan Association of Corporate Executives. It also emphasises the temptation to be profligate facing a leader who has become used to lavish spending in a wealthy economy supported by enormous debt.