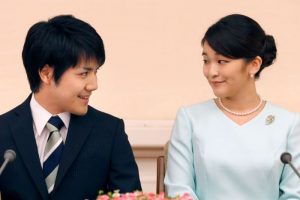 Freedom of speech in the media sometimes carries a heavy price Japan. It gives great power to the tabloid press, as the Imperial Family have found out to their cost this week.

Japan’s Princess Mako has announced she will be postpone her planned marriage to her fiance Kei Komuro for two years. This follows a report in the tabloids about Mr Komuro’s family background. Magazines have claimed there has been a dispute about money between Mr Komuro’s mother and a former partner.

The officials who represent the Imperial Family claim that the change of date for their marriage is unrelated to the tabloid reports but few people believe this.

Princess Mako and Mr Komuro announced their engagement last September and originally planned to wed in November this year. Since then, the tabloids have been trying to obtain stories about Mr Komuro and his family.

A magazine called Shukan Josei (Weekly Woman) first reported on his mother’s financial dealings with her ex-fiancé in December. A rival weekly, Josei Seven, suggested that the Imperial Household Agency did not run proper background checks on the Komuro family.

Another person targeted by the tabloids recently is the TV news presenter Junichi Tosaka, who worked at NHK for 20 years. He planned to switch to the rival channel Fuji TV soon but has stepped down from that role because of allegations in a tabloid about his alleged sexual behaviour.

The most famous weekly tabloid magazine Shukan Bunshun has accused Mr Tosaka of sitting next to another newscaster at a restaurant, before “touching her knees as if he was rubbing her” and whispering to her to “sneak out of the restaurant together.”

This has some strong echoes of the allegations of sexual impropriety by men which have been highlighted in many countries by the “Me Too” social media campaign. Many powerful men have been named as predators.

Tabloids like the Shukan Bunshun can print almost any allegation without much proof and although most respectable people say they do not believe all things they read in gossipy magazines, they do hold considerable influence.

Their reports spread like wildfire online and are often picked up by the mainstream newspapers and broadcasters. Sometimes the international media picks them up too, as was the case with the story about Princess Mako’s fiance.

In a country where most people are very respectful towards privacy and hierarchy, the reporters from the weekly magazine often break the rules to get the stories. The greater a person’s fame, the more the tabloid magazines will dig for anything which connects them to scandal. I met some reporters from Shukan Bunshun in Tokyo and I asked them if they pay money for information and they told me that they do not.

However, the greater attention their stories receive, the more kudos the reporters earn. And the people they write about have few weapons to fight back. Even if they are not true, allegations in the press can ruin a person’s reputation, career and relationships.