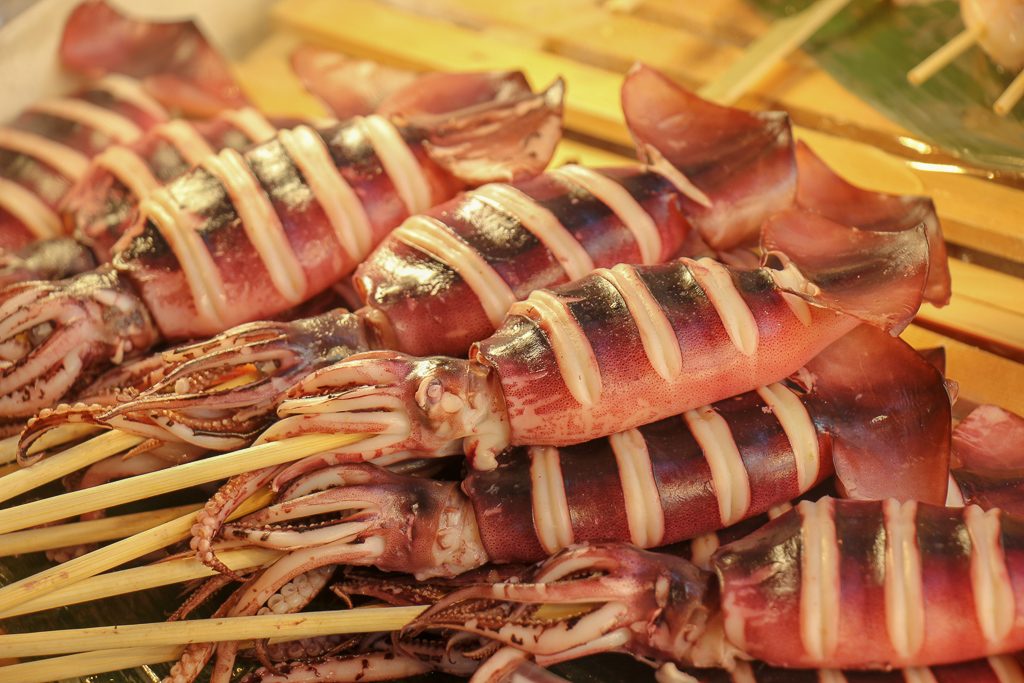 Why is it seen as rude to eat snacks, such as barbequed squid, while walking around?

Well, for the polite Japanese, walking and eating at the same time is “a big no no” according to the writer Mercedes Hutton, who’s done a nice article on this topic in this week’s South China Morning Post.

Mercedes claims that visitors to Japan are causing offence through our rude behaviour with food.

Our problem is that we apparently try to do two things at once – eating and walking – and this grieves our hosts, in places such as Kyoto’s Nishiki Market and Senso-ji, in Tokyo.

According to Mercedes, we foreigners are plainly not following the principle of “Ikkai ichi dousa”, which essentially means “ do one thing at a time”.

She writes: “This is a fundamental tenet of Japanese philosophy that promotes the dedication of particular attention to each aspect of our lives. Whether strolling along Takeshita-dori, in Harajuku, or savouring a Hokkaido soft-serve ice cream, every activity benefits from being singularly focused upon; do both at once and neither can be enjoyed to their full potential.”

While I am all in favour of mindful eating, I wonder what the social rules are when it comes to barbecue squid.

This treat, known in Japanese as ikayaki, is often sold at outdoor festivals, especially in the summer.

It’s served on a stick so it looks like a cross between an ice cream and a sea monster.

Although it’s very chewy, it tastes delicious. But it’s almost impossible to eat politely and cleanly with chopsticks – or even a knife and fork.

That means scoffing it down while standing up – perhaps while enjoying fireworks or watching a spooky dance aimed at entertaining ghosts, known as obon.

No one has ever given me instructions on how to eat barbequed squid, so I assume that the etiquette is this: it’s OK to eat it standing up but not while moving around. Stay in one place and throw the stick away afterwards – and probably aim to clean one’s face as soon as possible!

Mercedes notes in her piece that the Japanese probably won’t tell you this advice for fear of causing offence.

She concludes that this suggests “Japan has a problem with politeness.”

A more direct approach, she feels, would help avoid the simmering resentment caused by our bad table manners.

She suggests we follow the locals’ lead and hang onto our waste until it can be properly disposed of.

She says: “Doing so not only saves face for the long-suffering Japanese, it also helps to give tourists a better rep at attractions on the verge of being overwhelmed by visitors (masticating or otherwise), which can only be a good thing.”