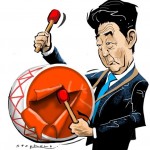 Shinzo Abe does not understand what it is like to be poor, according to an influential tabloid newspaper in Japan.

It was dismayed by his comments about low-income families made in parliament this week. This added to the debate over the prime minister’s credibility at a time when experts are taking stock of his attempt to revitalise the economy.

Abenomics was examined in a special report called Japan and the World, jointly produced by the Financial Times and its owner, the Nikkei.

The FT’s respected economics correspondent Martin Wolf asked if the three arrows of Abenomics will deliver the revival Mr Abe promised. “It is, alas, unlikely,” he replied.

Mr Wolf believes that weak private demand within Japan itself is the main problem and he urged companies to use the profits they make overseas to stimulate the domestic economy. He also said an increase in consumption tax could encourage Japanese individuals to spend their savings.

That is not a view shared by Mr Abe’s political critics. They say raising the sales tax further would be discourage spenders and push Japan back towards recession. Mr Abe plans to increase the consumption tax to 10% in the spring of next year and according to NHK, he has said he will do this “as planned, irrespective of the business environment.”

Mr Abe’s apparent “lack of understanding” of the economic situation of ordinary people was a discussed in the popular magazine Nikkan Gendai. It reported Mr Abe’s comments in parliament about how a low income couple could be entitled to a tax break by combining the earnings of the husband with the salary of the wife’s part-time job. The magazine said his answer suggested he is out of touch with how much money real families earn. It said that Mr Abe is an elite and wealthy politician who does not understand his citizens.

Masamichi Adachi, an economist at JP Morgan, believes “Mr Abe is doing Abenomics 2.0 because Abenomics 1.0 was not going well at all. He should have started with Abenomics 2.0 first because the most crucial issue is the population issue”.

That is a reference to Japan’s falling population. One theory is that many Japanese people resist having children because they are so expensive, according to research by the University of Pennyslvania. It also says many people think motherhood can harm the professional status of women.

However, there was encouragement for Mr Abe in the Nikkei Asian Review.

It said that in the three years since the prime minister’s economic policies were rolled out, corporate Japan has achieved record earnings. Furthermore, unemployment has dropped to about three percent, the lowest of any developed country in the world.

The magazine says that: “Abenomics has given foreign investors plenty of reasons to be interested in Japan.”

The former head of the US Treasury Larry Summers agrees that Abenomics has made Japan a better place, although Mr Summers remains concerned about the lack of a normal inflation environment and he suggests that the Bank of Japan should now halt to its expensive quantative easing programme.

Mr Summers told the FT: “The next decade will be pivotal for Japan. We all hope that Abenomics – to borrow from Winston Churchill – will not even be the beginning of the end but the end of the beginning of Japanese renewal in the 21st century.”