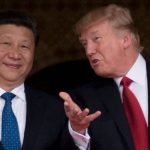 Most politics in Japan is influenced by its two most important relationships; those with China and the United States.

Both China and the US claim the summit meeting was a success. Mr Trump said there was “tremendous progress” in the US-China relationship during the talks.

By contrast, Japan’s current diplomatic relationship with China is in a poor state, with no recent top-level contact between Prime Minister Shinzo Abe and President Xi.

Mr Abe has attempted to build a rapport with Donald Trump over rounds of golf. And for reasons of both trade and security, Japan would like to see a peaceful, friendly relationship between the US and China.

That is also China’s goal, according to a statement on China’s foreign ministry website. Mr Xi apparently told Mr Trump: “We have a thousand reasons to get China-US relations right and not one reason to spoil the relationship.”

During his trip to Florida for the summit, Mr Trump took the decision to order a missile attack on Syria. He said it was in response to the use of chemical weapons.

The US and Chinese presidents also discussed North Korea.

Mr Trump told the Financial Times before the meeting that “If China is not going to sort out North Korea, we will.”

So what signal did the missile strike on Syria send to North Korea and the rest of Asia?

Did it suggest that the US would consider a missile strike on North Korea to stop its nuclear weapons programme?

The Financial Times’ editorial said that unilateral armed intervention by the US in North Korea would be “calamitously risky.”

“If North Korea’s nuclear capacities were taken out with bunker-busting missile strikes, Pyongyang could destroy Seoul with its artillery almost immediately. Its missiles could reach Japan. Millions of lives would be at stake,” said the FT.