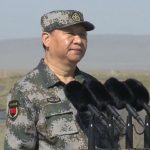 As China prepares to decide who will lead the country for the next five years, the rhetoric against the Chinese Communist Party is growing louder in some sections of the international media.

This week, Japan’s right-wing nationalist newspaper the Sankei used its website Japan Forward to interview a political activist who claimed that: “Asia is now being steadily colonised again, not by the West but by the Chinese Communist Party.”

And the Financial Times has drawn its readers’ attention to the close grip the Communist party has on Chinese businesses and its power over the foreign firms doing business in China, including Japanese companies.

This autumn, the inner circle of the Chinese Communist Party will meet to decide if Xi Jinping will remain its general secretary for the next five years, or if another man will lead the nation.

Japan hopes that China’s leader will be friendly because China is Japan’s largest trading partner and their economic fortunes are closely linked. Diplomatically, though, the relationship between them remains extremely cool.

China often blames this problem on Japan’s prime minister, Shinzo Abe, who it regards as a provocative nationalist. However, in terms of foreign policy and business, Mr Abe generally takes a very internationalist approach, as illustrated by the recently brokered free trade deal with the EU.

The problem, as China sees it, is Japan’s close link to the United States. Mr Abe has maintained friendships with both Presidents Obama and Trump and last week, Japan’s Defence Minister Itsunori Onodera visited the US Defense Secretary Jim Mattis in Washington. They confirmed their commitment to the military alliance.

That sends a message that the US stands ready to defend Japan if it is attacked by North Korea. However, China loathes the idea of America playing a greater military role in East Asia.

That has been made clear to the politicians and business leaders of South Korea. In the wake of the growing belligerence from North Korea, the South Korean government has agreed to deploy an American anti-missile defense system known as THAAD.

China has responded by imposing sanctions on South Korea which could “cripple its economy” according the website, The London Economy.

Japan wishes to avoid any such problems with China, especially if they affect the many Japanese-owned factories on the mainland.

Yet Prime Minister Abe’s government takes the view that the alliance with the US is of more value to Japan’s long-term security than a friendly relationship with the powerful Chinese Communist Party.