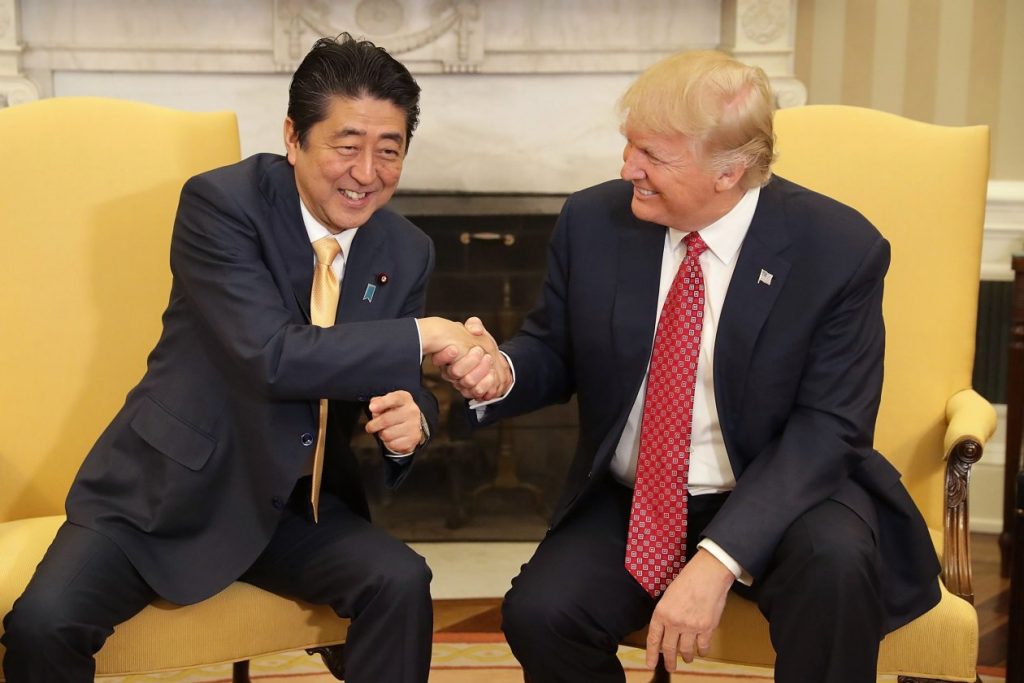 Japan’s Prime Minister Shinzo Abe appears closer to Donald Trump than any other foreign leader. He could even be regarded as having an “America First” policy, with the goal of convincing Mr Trump to act in the best interests of America’s ally Japan.

Yet it is a far from easy relationship. For the past week, Mr Abe has been a constant voice in Donald Trump’s ear. First, he went to Washington for talks about trade and North Korea at the White House. Then, Mr Abe attended a difficult G7 meeting in Canada, at which Mr Trump clashed with other members of the group.

The G7 leaders tried to show Mr Trump the value of collaboration on trade, apparently to no avail. A photograph of the meeting shows Mr Abe looking frustrated at a confrontation between President Trump and the German Chancellor Angela Merkel.

Almost as soon as he returned from Canada, Mr Abe was back on the telephone to Mr Trump ahead of the Singapore summit with Kim Jong-Un of North Korea. Mr Abe said that he hopes the summit will be a major step toward peace and stability in Asia and reminded reporters that Japan, the United States and South Korea share a similar foreign policy in response to the threat from North Korea.

Journalists from Reuters helped to put the Abe-Trump relationship into context. “In dozens of conversations, Mr Abe has counselled President Trump to avoid making concessions to North Korea that could upset East Asia’s balance of power – including a military retreat from South Korea that would leave Tokyo alone on the front lines against China’s growing power.”

Mr Abe finds common ground with Mr Trump on the challenges arising from China and North Korea. Nevertheless, they fundamentally disagree about their basic approach to trade. Mr Abe favours multilateral, international agreements but these are anathemas to the protectionist tendencies of Mr Trump.

Mr Abe said after the G7 meeting in Canada that there had been moments of “intense debate” during the discussion on trade and suggested that “anxiety and dissatisfaction with globalisation” sometimes leads to protectionism. “But we must not turn back the clock,” he added. “For measures that restrict trade will not be in the interests of any country.”

Mr Abe has lobbied President Trump for an exemption on steel and aluminum tariffs imposed by America – so far, to no avail. Like other leaders, Mr Abe must wonder if he can trust Mr Trump to hold to international agreements.

Yet a quote from the Financial Times by the former leader of the Conservative party in Canada, Rona Ambrose, indicates why Mr Abe still values his talks with Mr Trump. “There is is nothing more important than leaders looking each other eye to eye,” she said. “Minds are changed and opinions are swayed.”